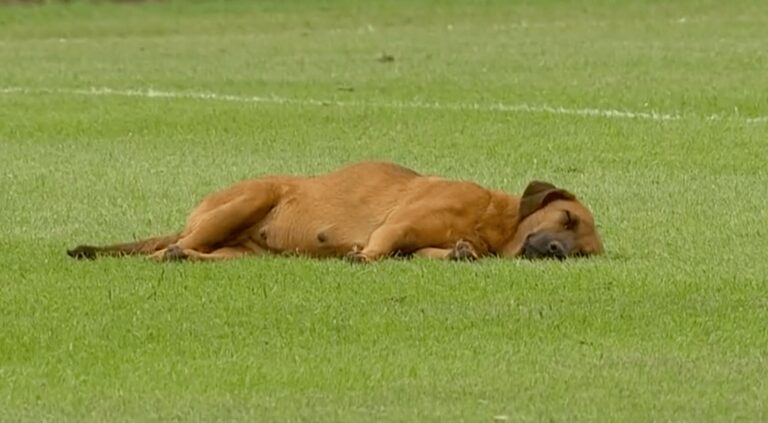 In hilarious scenes, a match in the Paraguay first division had to be temporarily halted after a dog invaded the pitch, and then fell asleep.

The incident took place during a match between Sol de America and Guarani in the top flight of Paraguayan football.

The match was won by the hosts, with Cristian Duma scoring a second-half penalty to secure a 1-0 win.

But, obviously, that wasn’t the main talking point from the match. As Duma prepared to kick off to get one half underway, he was forced to wait.

The camera then panned to a dog that was laid out at one end of the pitch in Paraguay, asleep. The clip then ends with the referee blowing his whistle and play resuming.

It isn’t exactly clear whether the dog was off the pitch when that happened, but you would have to assume that was the case. You can see the footage below:

This isn’t the first time a dog has entered the field of play during a match. It happened during an international friendly between Chile and Venezuela last year. A dog ran onto the pitch, before approaching the goalkeeper.

Seemingly content with just playing with the players, the dog firstly ran up to the referee, before breaking away from the stewards and running up and down the pitch. They then listened to the team talk the Chile manager was delivering.

On another occasion, a dog ran on to the pitch during a game in Bosnia. They ran up to one of the players, before stealing the ball and nutmegging three different players with it. The fun ended shortly afterwards, as security escorted the dog off the field of play.