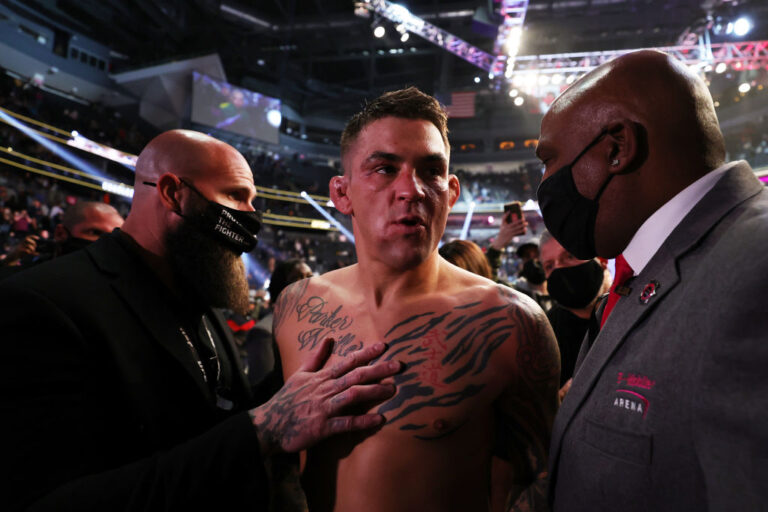 On Saturday night, Dustin Poirier was unsuccessful in his attempt to rip the UFC lightweight championship away from Charles Oliveira. But that doesn’t mean that ‘The Diamond’ will give up on his dreams.

Once Christmas is over, the 32-year-old will no doubt be right back in the gym, working towards his next fight.

At UFC 269, the Louisiana native came agonisingly close to capturing the UFC world title for the first time. He may have been an interim champion in the past, but this was his second shot at becoming a fully-fledged king and solidifying his legacy.

The fight couldn’t have started any better. Poirier put the champion down in the opening segment multiple times and was a blow or two away from winning the contest. However, it wasn’t to be for the fan favourite.

From the second round onwards, his Brazilian opponent grew into the fight. And following a nasty five minutes of brutal ground and pound, he submitted Poirier at the start of the third.

The loss was heartbreaking for ‘The Diamond’ and, indeed, his fans. Many are wondering if he’ll ever claim the elusive gold.

His supporters can be encouraged by one thing. The American hasn’t ever given up on his dreams, and hopefully he continues to fight in the Octagon. Therefore, we’ve taken a look at three potential opponents that could square off against Dustin Poirier in his next fight.

The rivalry between these two men is one of the greatest in the sport’s history.

Following months of heated confrontations, Conor McGregor walked away with the bragging rights and the knockout win in the first fight. However, Poirier had vastly improved when the pair collided in the rematch.

The American overcame his aggressive opponent to secure a massive second-round finish.

Whilst the second contest was respectful, the third was not. There was a dispute about whether the former world champion had donated the money he had promised to Poirier’s charity. This created all the ingredients for an actual grudge match.

As always, the Irish superstar started strongly. However, once again, Poirer survived the storm. He then took the 32-year-old down before dismantling him with nasty blows from top position.

McGregor was eventually able to rise to his feet, but what happened next shocked everybody. The lightweight took a step back and snapped his tibia in the process.

The legend sat on the canvas shouting abuse at his opponent’s family in the contest’s aftermath. The injury, however, left the Dubliner’s fans with an angle to campaign for a fourth fight.

Could ‘The Notorious’ have come back into the fight? We’d have to see another instalment to find out.

The former three-time Bellator champion may have just lost to Justin Gaethje, but the incredible nature of the fight has sent his stock through the roof.

The heart and courage that Michael Chandler displayed that night endeared him to fight fans more than ever before. Therefore, he is still in the mix with all the elite fighters in the lightweight division.

There could be a good chance that he could bag the Poirier fight next with this placed into consideration. And stylistically, there may be no other contest in the division that would excite MMA enthusiasts as much as this one.

Chandler’s wrestling pedigree, in addition to his monstrous punching power, could cause his countryman problems. However, Poirier’s superior boxing ability makes this potential battle a very intriguing prospect.

And what better way to bring both these superstars back than to match them up against one another in a massive domestic showdown?

The dangerous Russian has looked nothing short of terrifying in his UFC run to date. In his last contest, he dismantled top ten contender Dan Hooker inside of three minutes to strike fear into the entire division.

Along with his colossal marketability, his current form could put him in line to fight Poirier next. The Dagestani grappler is trained by UFC legend Khabib Nurmagomedov who is supremely confident that his countryman can replicate everything he achieved in the sport.

This contest would undoubtedly interest the American. He may never get a chance to avenge his loss to one of the greatest of all time. But beating his prodigy would go a long way towards healing that wound.

Does Dustin Poirier need a next fight?

‘The Diamond’ may be yet to win a world championship belt, but that doesn’t prevent him from being one of the greatest lightweights of all time.

Fans will never forget the amazing wars he has treated them to throughout his illustrious career. His fights with Justin Gaethje, Max Holloway and Eddie Alvarez will live long in the memory.

Irrespective of whether he wins the title or not, he’s a guaranteed first-ballot Hall of Famer. His determination, courage and ability to overcome adversity have made him into the legend he is today.

If he never sets foot in the Octagon again, fans will still remember him for the incredible athlete and personality he was.