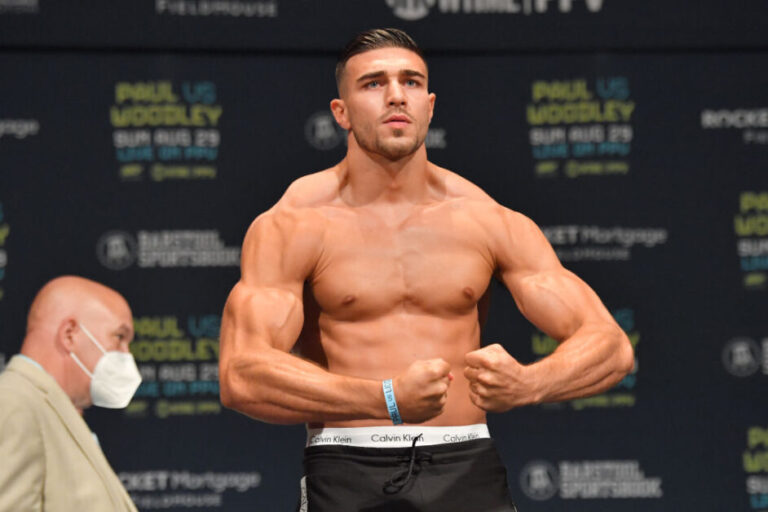 Tommy Fury was only two weeks away from a mega-fight with Jake Paul before he was forced to withdraw from the bout through injury.

The 22-year-old’s promoter, Frank Warren, announced on his social media that Fury is currently suffering from a severe bacterial chest infection and a broken rib.

His decision to pull out of the contest has received criticism from the opponent he would have been taking on.

The YouTuber took to Twitter to make his feelings on the Love Island star abundantly clear.

He said: “It is official – Tommy Fury is boxing’s biggest bitch. He has pulled out of the fight due to a medical condition. Who knows what’s going on in that camp? I think he has a bad case of p***yitis.

“I couldn’t believe the news at first. It still doesn’t even seem real. He fumbled the biggest bag of his life. He’ll be watching at home paying me $60 to watch the fight instead of getting millions himself.

“I’ve fought with a broken nose. I’ve fought sick. Get the f**k over it; this is boxing. He was officially scared. I think the pressure got to him, and the s**t talking got to him.”

What Fury has said about his injury

Tommy Fury posted a video on Twitter in which he discussed his injury and revealed how devastated he is that he has had to cancel the fight.

Fury explained: “The first four weeks of training camp couldn’t have gone any better. But then I contracted a bacterial chest infection which meant that I couldn’t breathe in the gym. In my sparring and pad sessions, I was coughing up huge amounts of phlegm, which led to sleepless nights.

“This carried on for four weeks because I had the mindset that I was going to fight no matter what. I decided to spar and took a little clip to the body, but because I was so weak, I started throwing up from the pain. Instantly I knew that something was wrong.

“I got my bag and went straight to the hospital for an MRI scan. The results returned the same day, and I found out that I’d suffered a clean break in my rib. For the first week, I thought I was going to fight, but the doctor and my whole team had to tell me that I couldn’t.

“Even now sat here filming this video, it hasn’t sunk in. All my focus goes on recovering and getting a new date with Jake Paul. It’s the only fight that I want.

“People can have their opinions, but there is nothing that I can do about not being medically fit to fight.”

Who will Jake Paul get in the ring with next?

Combat sports enthusiasts around the globe were devastated to have lost their festive boxing treat. But luckily for them, the ex-Disney presenter has found a replacement for the younger brother of the heavyweight champion of the world.

On December 18, Paul will face off with Tyron Woodley in an eagerly anticipated rematch. Their first encounter was highly entertaining. The UFC veteran had Paul stumbling through the ropes, on the cusp of defeat. But instead of going all out to try and find the knockout, he allowed his opponent to recover and ultimately lost the contest because of it.

The Missouri-born man knows that he can hurt his opponent with his monstrous right hand. But we’ll have to wait and see what happens until the pair finally meet in the ring for the second time.

Will Paul vs Fury ever happen?

We know that the Brit is desperate for his chance to finally settle the grudge with his American rival. But that doesn’t necessarily mean he’ll get the opportunity. If Paul was to get beat this weekend, then a match-up with Fury hugely diminishes in value. And even if he was to win, it doesn’t guarantee that he’d pick the reality star as his next opponent.

However, the appetite for the fight is still there. The contest had gathered tremendous momentum and was destined to be one of the biggest of the year. Therefore it only makes sense to reschedule it when the 22-year-old recovers.

The public is desperate to see the bout, especially following a raucous press conference between the pair.

The combat sports community is wholly split on who would win the fight. Some feel Paul’s natural talent, ability to handle the big stage and tremendous punching power would overwhelm the Brit. But on the other hand, many also believe that Fury’s experience, footwork and superior boxing skill would help him teach the YouTuber a boxing lesson.

It’s such an intriguing contest with so much on the line for both men. The grudge is real. They both believe that they are astronomically better than the other.

Broken ribs typically take up to two months to heal, meaning that Tommy Fury will return from his injury soon. This means that there could be a window of opportunity for this fight to take place next spring.

Fans can make predictions on who they think would win the bout. But the only thing we’ll ever know for sure is if the two men rearrange the fight and settle their differences in the ring.