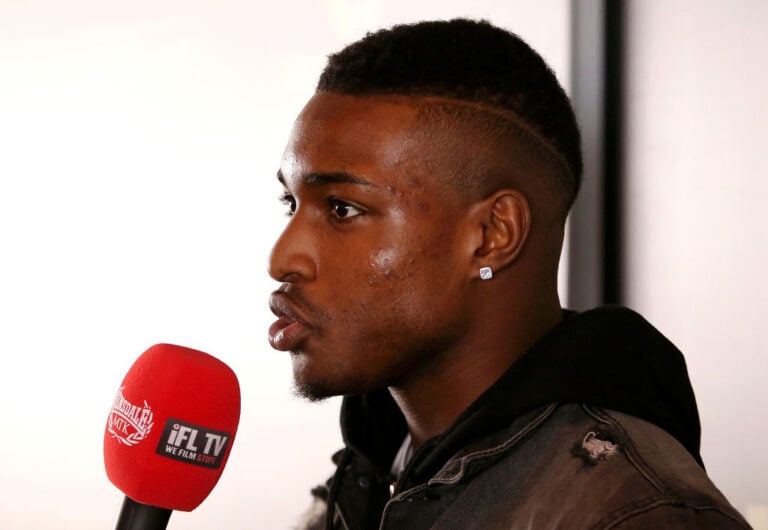 Idris Virgo wants the opportunity to knock out YouTuber Jake Paul in his next fight.

The American sensation was scheduled to face Tommy Fury on December 18. However, the Brit has had to pull out due to a broken rib and a severe chest infection. Instead of supporting his countryman, Virgo has decided to take another route.

He took to social media today to offer his services to the former Disney presenter and verbally assault Fury.

He said: “So Tommy ‘Fumbles’ Fury has pulled out from the fight with Jake Paul. Oh, my days.”

“As a fighting man, I am willing to step in at short notice and fight Jake Paul. What are you saying, Jake? The best in the UK, Mr Love Islander, Mr Lover Lover Man, are you ready to face the one and only Idris Virgo? Paul vs Virgo, let’s get it on, December 18. I’m ready.”

Read: Jake Paul vs Tommy Fury: What is next for both men following fight cancellation?

Unfortunately for the Brit, a bout with the Cleveland native is unlikely to occur in December. Paul has saved his PPV date by scheduling a rematch with Tyron Woodley.

However, that doesn’t mean that a fight can’t happen in the future. Virgo has fame on both sides of the Atlantic, and with the trash-talking ability to go toe to toe with the American, a collision between the pair could make sense.

Let’s have a look at Virgo’s career in reality television and in the boxing ring to see if he’d be a worthy adversary for the multi-millionaire:

How did Idris Virgo get on in Love Island?

Idris Virgo may have only lasted five days in the infamous Spanish villa, but he certainly made a splash throughout his short-lived season.

During his first evening on the show, Virgo was given the opportunity to go out for a meal with a girl of his choosing. He picked fan favourite, Laura Anderson, and what happened on the date shocked the fans of the ITV2 show.

Is the Brit famous enough in America to be the next fight for Jake Paul?

The 28-year-old’s reality TV career hasn’t just been exclusive to the UK. In 2019, Virgo competed on The Challenge 34: War of the Worlds 2.

He was a representative of Team UK, taking on an experienced crop of American veterans with multiple championships between them.

Virgo’s season started brightly. After the first daily mission, the boxer was voted into an elimination, in which he had to fight for his place in the game.

The Brit was forced to take on countryman Sean Lineker in a pole wrestle where the players had to use all their might to rip the object from their opponent’s grasp.

Following an exceptionally hard-fought battle in which both men had to go to the well, Virgo eventually emerged the victor.

Although the Brit got off to a fearsome start, becoming a Challenge champion wasn’t meant to be. In the ninth episode of the series, he exited the competition following a loss in the ‘Proving Ground’ to fellow Love Island star and Team GB sprinter Theo Campbell.

The most important question is: can Virgo fight?

The Birmingham-based brawler is currently unbeaten in his twelve professional boxing outings.

He recently defeated France’s Gregory Trenel at the SkyDome Arena in Coventry on November 13. However, Virgo is now at the stage where he needs to start pursuing the big fights, and Paul would certainly be one of them.

The outspoken Brit is going out of his way to promote himself, and he doesn’t mind playing the bad guy.

In a raucous round table discussion, an animated Virgo poured water all over journeyman Scott Williams. The room descended into chaos, as his opponent’s team couldn’t help but show their displeasure, and Virgo responded aggressively.

Williams questioned whether the reality television star was as good as he said he was.

He asked: “If you’re that good, why are you fighting journeymen? I’m a journeyman. You’ve had seven fights. If you were any good, you’d be fighting for a British title.”

Could the fight actually happen?

Although the contest may not be on the horizon anytime soon, a battle between Virgo and Paul would likely still be exhilarating.

The build-up would be must-see TV, especially if the Brit tried to pour his drink over his American counterpart.

There could be a collision to be separated right there and then. But would it be competitive?

The ‘Body Breaker’ has far more experience than the American, which could pay dividends in the fight. He only has, however, one knockout in his twelve bouts. That could make Paul the bigger puncher.

The YouTuber may be criticised for his technique, but his thunderbolt of a right hand can’t be overlooked. This event could captivate sports fans around the globe and would more than likely sell out any arena on either side of the Atlantic.