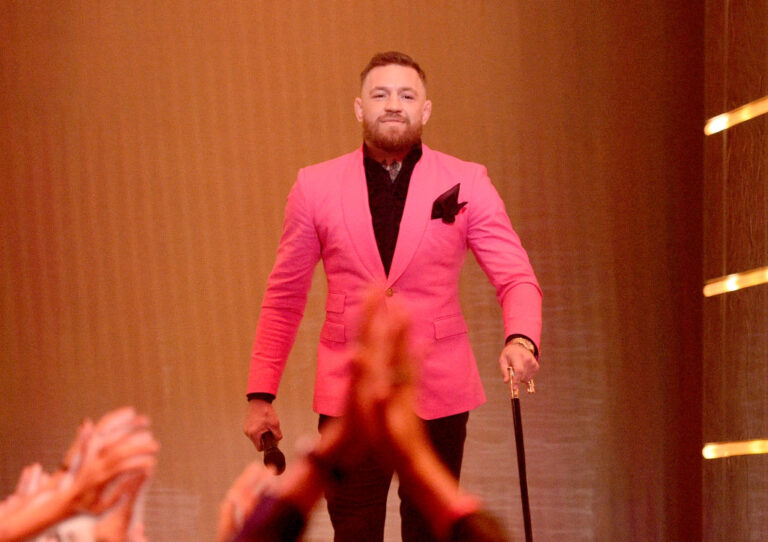 Conor McGregor has been out of action since breaking his tibia in a July 2021 defeat to Dustin Poirier. The gruesome nature of the injury made it immediately apparent that the Irish superstar would stay sidelined for a significant period. However, from the moment McGregor left the hospital, he vowed to come back better than ever.

His declarations have become more grandiose with every passing month. McGregor has engaged in Twitter spats with old foes like Nate Diaz and applied confident captions to pictures of pumped-up poses on Instagram.

It adds to the curiosity about who McGregor will face when he eventually returns, with a summer comeback looking likely.

McGregor’s longtime trainer and friend John Kavanagh appeared on The MMA Hour with Ariel Helwani earlier in the week.

It was his first interview with Helwani in more than a year, as the two reminisced about when remembering it took place at the start of the pandemic.

Kavanagh’s primary objective for the interview was to promote an event for a worthy cause. Irish MMA fighter Ian Coughlan suffered a freak accident in training in late July 2021 that left him paralysed. Kavanagh was promoting a GoFundMe page for Coughlan to help him pay for the expenses that come with this – hopefully, temporary – lifestyle change. He also gave details about related events and auctions focused on fundraising.

Helwani was happy to share information about the worthy cause and also found time to ask about the likeliest next opponent for McGregor.

The next fight for Conor McGregor

Kavanagh revealed that it’s likely that the next fight for Conor McGregor would see him engage in a ‘legacy’ bout against a veteran scrapper of a similar era.

He said: “I’ll be honest. The Nate Diaz fight is very, very tempting.

“It’s a fight that gives me nightmares. The man doesn’t stop coming forward – whether it’s three rounds or five rounds. But it’s an intriguing fight. So that one is very interesting. But also the Tony Ferguson one.

“It never happened [before]. It was talked about a lot. Tony – he still has, I believe, a lot to offer the game. He’s a very unorthodox striker, grappler. I think the build-up would be fun for the fans. So, you know, any of those kinds of legacy guys.

“But look, that division is killer. You’ve your Dan Hookers in there. The Islam [Makhachev] fight would be amazing as well for obvious reasons. And we have whoever is going to win that [UFC Lightweight] belt.”

As Helwani clarified a moment later, that lightweight title fight between champion Charles Oliveira and challenger Dustin Poirier takes place at UFC 269 this Saturday. Expect a McGregor reaction no matter what.

McGregor has lost his last two fights (both to Poirier) as part of a run of three losses in four. His stock as a fighter has plummeted as a result. He’s fallen down the rankings he once topped, and those who believe his hype now appear to be in the minority.

In short, he desperately needs a win.

A comeback fight with the lightweight champion, whoever he may be, would undoubtedly sell a lot of PPVs. Yet, while Dana White is known to pander to McGregor, even he might struggle to justify such a booking.

The ‘legacy’ fights Kavanagh is talking about make sense for McGregor because they’re against fighters who are winding down their careers. This fact doesn’t mean that they would be easy to defeat. In fact, they would come with a unique pressure attached because fans would perceive it as handpicking opponents.

Despite his current skid, as ever, onlookers await McGregor’s next move.