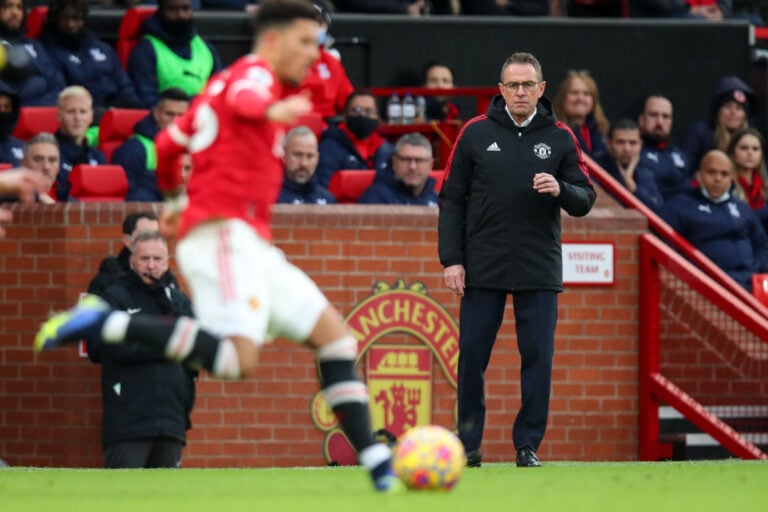 On Sunday, Ralf Rangnick got his Manchester United reign off to a winning start when they beat Crystal Palace 1-0 at home. The Premier League fixture attracted plenty of attention before kick-off because of the hype surrounding Rangnick.

Billed as the polar opposite to predecessor Ole Gunnar Solskjaer in terms of preparation, onlookers hoped, rather than expected, to see immediate changes.

Sure enough, United performed with a focus and energy lacking in previous outings. (Although interim-to-the-interim boss Michael Carrick deserves credit for restoring a previously absent level of organisation.)

In the days since that victory, experts have poured over video footage of United’s play, highlighting positive changes brought about by Rangnick. On Monday Night Football, Gary Neville highlighted a fundamental change Rangnick has already implemented.

The consultation of statistics wasn’t necessary to notice United’s impetus or the evidence of a focused press. But the data backs up and underlines the immediate improvements United made under Rangnick.

A Sky Sports graphic showed that United had improved upon their season’s average in multiple metrics. Among those were shots on target against, xG against, tackles, duels won and possession in the final third. However, the key insight Neville made revolved around metrics that, at face value, appeared to drop in Rangnick’s first outing.

Working smarter instead of harder

United ran a below-average distance (down from 105km to 101km). They also registered fewer sprints than expected (132 down from 135.2) against Palace. These stats inspired Neville to declare that the team were working ‘smarter, not harder’ before elaborating on his analysis.

On paper, it may look like a strange way to arrange a team. However, it makes complete sense for a coach focused on pressing to choose it in practice.

Read: The stats that underline Fred’s dominance against Crystal Palace.

Neville made his point by contrasting clips from the Palace win with a home defeat to Aston Villa during the Solskjaer era. United prepared for counter-attacks in pairs. Making sure that players remained in their pairings and didn’t stray too far away from each other positioned United well to smother breakaway attacks. This strategic placing denies attackers space and closes down passing avenues.

By setting up his team to anticipate attacks before they began, Rangnick cut out the need for additional running and the threat of unnecessary danger. This threat loomed large under Solskjaer this season. His team was often disorganised, stretched and consequently busting a gut to regain control and order.