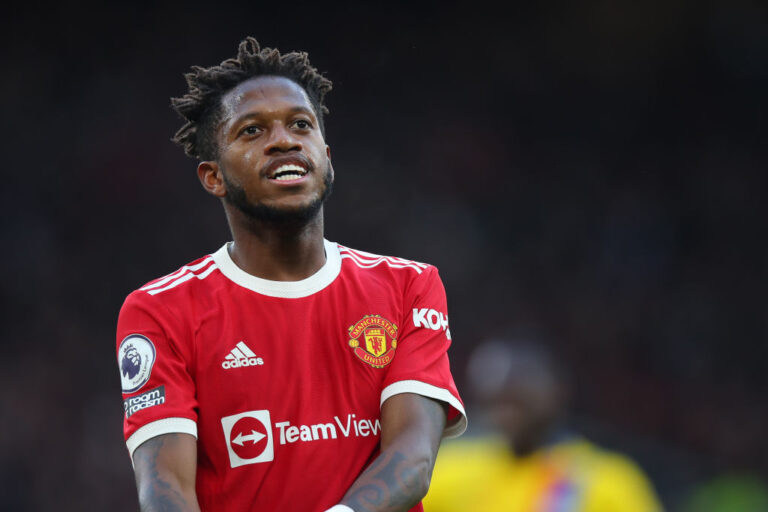 The Salford-based club’s impressive run of form since the departure of Ole Gunnar Solskjaer continued on Sunday.

Rangnick’s first game in charge of the Red Devils was a success. His side entertained the Old Trafford faithful in a 1-0 victory over the Eagles.

However, there was one man whose performance almost outshone the new manager’s significant victory. That was Fred.

The Brazilian has been the subject of criticism from United fans, but they certainly didn’t have anything to complain about at the weekend.

In the 77th minute of the fixture, the ball fell to the midfielder from outside the box, and he smashed it into the top corner with laser-like precision.

The home fans celebrated the marvellous goal, but Fred was the most excited. He sprinted towards the supporters before belly sliding right before their eyes.

The goal will undoubtedly relieve the heavy load that Fred has been carrying on his shoulders all season.

Why was his performance so impressive? Let’s take a look at the numbers:

How did Fred perform?

According to WhoScored, Fred was the best player on the pitch. The United man averaged an excellent 8.5 overall score, which was far superior to any other player.

He put in seven tackles which, alongside Alex Telles, was the most in the game. In addition, he completed 72 passes with an 83.3 per cent accuracy. He held on to the ball for a total of eight per cent of the overall possession – only Telles recorded higher in this regard.

Furthermore, Fred was vital in the centre of the field. He played his role perfectly, creating brilliant attacking moves in the process.

It’s no secret that the Brazilian hasn’t always been a major fan favourite at the Theatre of Dreams. But he will hope that his fantastic display on Sunday will be a catalyst and that his good form will continue.

What did Rangnick say about the midfielder?

Rangnick was dazzled by his midfielder’s incredible finish at the weekend. He cheekily told Match of the Day that he thought the 28-year-old could only use one foot.

He said: “I had to ask my assistant coach if that was Fred’s right foot. I thought he could only shoot with his left! I’m happy for him.”

With the appointment of Rangnick at United, the sense of optimism at Old Trafford is now simply off the charts. It perhaps hasn’t been at such a level since the days of Sir Alex Ferguson.

The German is renowned for taking over struggling teams and building them towards better things. His ability to instil confidence into his players is remarkable, and maybe one player who will benefit from this more than any other is Fred.