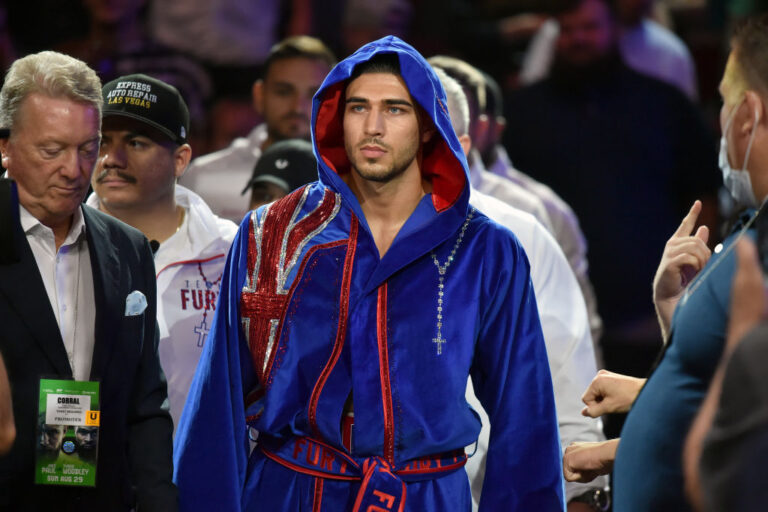 Tommy Fury seemed to be prepared for his monster fight with Jake Paul. However, the Brit announced on Tuesday that he was withdrawing from the contest.

The 22-year-old’s promoter, Frank Warren, announced on his social media that Fury is currently suffering from a severe bacterial chest infection and a broken rib.

How has Jake Paul reacted?

The Brit’s decision to pull out of the contest has devastated boxing fans. Interest in the matchup between the YouTuber and the Love Island star went beyond sports fans and appealed to a broader audience.

However, Paul has saved the December 18 PPV date by scheduling a rematch with Tyron Woodley. This may not be the fight that the public was clamouring for, but at least their Christmas boxing extravaganza still exists in some form.

The American took to social media to express his feelings towards Fury and confirm the highly anticipated second encounter with the former UFC world champion.

He said: “It is official – Tommy Fury is boxing’s biggest bitch. He has pulled out of the fight due to a medical condition. Who knows what’s going on in that camp? I think he has a bad case of p***yitis.”

“I couldn’t believe the news at first. It still doesn’t even seem real. He fumbled the biggest bag of his life. He’ll be watching at home paying me $60 to watch the fight instead of getting millions himself.”

“I’ve fought with a broken nose, I’ve fought sick. Get the f**k over it; this is boxing. He was officially scared. I think the pressure got to him, the s**t talking got to him.”

“That’s the bad news, guys. However, the good news is that Tyron Woodley, who’s been training, is stepping in for the rematch.”

“I’m going to pay him an extra $500,000 if he can knock me out. Jake Paul vs Tyron Woodley 2, let’s leave no doubt. I didn’t knock him out the first time, I’m coming back, and I’m getting that crazy highlight-real finish. December 18, the show goes on. I’ll see you guys there.”

Tommy Fury posted a video on Twitter in which he provided proof of his injuries and revealed how devastated he is that he has had to cancel the fight.

Fury explained: “The first four weeks of training camp couldn’t have gone any better. But then I contracted a bacterial chest infection which meant that I couldn’t breathe in the gym. In my sparring and pad sessions, I was coughing up huge amounts of phlegm, which led to sleepless nights.”

“This carried on for four weeks because I had the mindset that I was going to fight no matter what. I decided to spar and took a little clip to the body, but because I was so weak, I started throwing up from the pain. Instantly I knew that something was wrong.”

“I got my bag and went straight to the hospital for an MRI scan. The results came back the same day and found out that I’d suffered a clean break in my rib. For the first week, I thought I was going to fight, but the doctor and my whole team had to tell me that I couldn’t.”

“Even now sat here filming this video, it hasn’t sunk in. All my focus goes on to recovering and getting a new date with Jake Paul. It’s the only fight that I want.”

“People can have their opinions, but there is nothing that I can do about not being medically fit to fight.”

Why has this Tommy Fury training footage gone viral?

Fury’s statement clearly outlines the reasons behind his decision to pull out of the fight and what ultimately led to the broken rib he suffered.

However, that hasn’t stopped some boxing fans from coming up with another theory behind the Love Islander’s broken rib and subsequent withdrawal from the bout.

Footage has emerged of Tommy Fury training for the fight. In the video, his elder brother performs a ruthless workout regimen upon him.

The heavyweight world champion is seen hitting his younger sibling repeatedly with a medicine ball.

Of course, there is no indication that the video, which Tyson Fury posted on his Instagram account on November 9, has anything to do with his brother pulling out of the fight.

How did Tommy Fury prepare for the fight?

Despite rumours that Tommy Fury had been looking good in the gym, the circumstances surrounding the training camp were far from ideal.

The 22-year-old initially intended to train under the tutelage of renowned coach Sugar Hill Steward in Las Vegas. However, he had to leave America to look after his mother, who was suffering from illness. Therefore, Fury was forced to stay in Morecambe to prepare with the help of his family, but videos of his training decreased as the date of the fight got closer.

The injury is potentially a blessing in disguise for the Brit, who may have struggled to fight with the chest infection.

Fury can now only hope that he can rearrange what would likely be the biggest fight of his entire career to date.