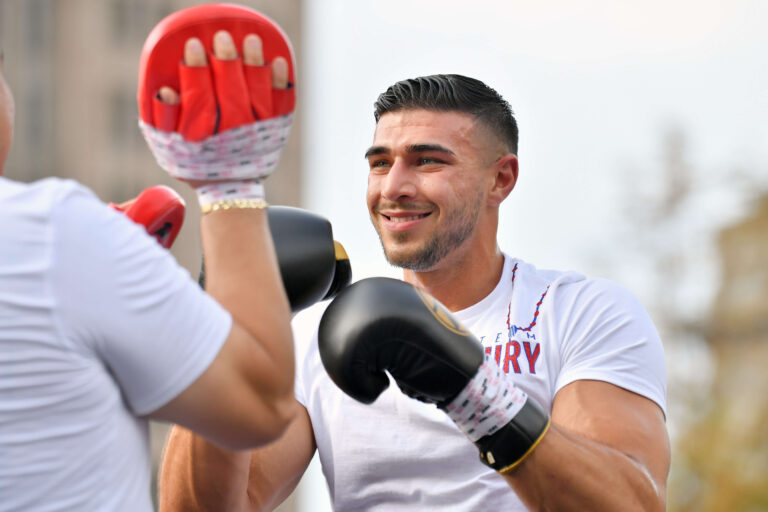 The highly-anticipated fight between Jake Paul and Tommy Fury is now off after Fury decided to pull out.

The bout was due to take place on December 18 at the Amelie Arena in Florida.

It would have seen two fighters face off who are unbeaten at the professional level. Paul, 24, has recorded four victories. He most recently defeated UFC star Tyron Woodley via a split decision in August.

Fury, meanwhile, beat Anthony Taylor by unanimous decision on the same card to set up the blockbuster fight with Paul. His record stands at 7-0.

In November, the pair took part in a heated press conference, previewing the fight.

They exchanged many verbal insults, and even Tyson and John Fury got involved in the action.

Now, however, both men will be looking to a future that, in the immediate term at least, doesn’t see them facing off in the same boxing ring. Let’s take a look at what could be next for both Jake Paul and Tommy Fury:

Who will Jake Paul face next?

Alongside confirmation that his fight with Fury is off, it has been announced that Paul will now be taking on Tyron Woodley in a rematch.

The Daily Mirror has said that Woodley has accepted an offer to stage a “big-money bout”.

Paul himself announced that Woodley would indeed be stepping in as Fury’s replacement on December 18.

The former UFC welterweight champion will be taking part in only his second boxing match. Woodley stepped into the ring to face Paul on the first occasion after four straight losses in UFC.

The 39-year-old certainly gave the YouTuber a run for his money. Paul won the fight by split decision. He was up 77-75 and 79-74 on two judges’ scorecards, whilst the other judge called the fight 77-75 in favour of Woodley.

Speaking after the first fight, Paul seemed to deny any chance of a potential rematch with Woodley. The pair’s contract had an agreement that the loser would get the winner’s name tattooed on them. However, Woodley said he wouldn’t have the tattoo unless Paul agreed to a rematch.

It was reported by the Daily Mirror last month that Paul had verbally agreed on a rematch if Woodley got a tattoo.

The 39-year-old posted a photo showing he had indeed got the tattoo. However, Paul instead set up the fight with Fury.

Who will Tommy Fury fight next?

Tommy Fury’s promoter, Frank Warren, announced at the end of November that his fighter had been struck down by illness in the build-up to the Paul fight.

He has since confirmed the news that Fury has had to withdraw from the fight due to a severe chest infection and broken rib.

What happens next surely depends on how quickly he recovers from the chest infection and broken rib. However, you do sense that the rivalry behind Fury and Paul does not end here.

In an interview, Fury’s father, John, told Rob Moore that Tommy could take on Paul’s brother Logan after any fight with Jake.

Right now, an eventual clash with Jake Paul seems the most likely option for Tommy Fury – and that is certainly what he is hoping for.

We surely haven’t heard the last of this one.