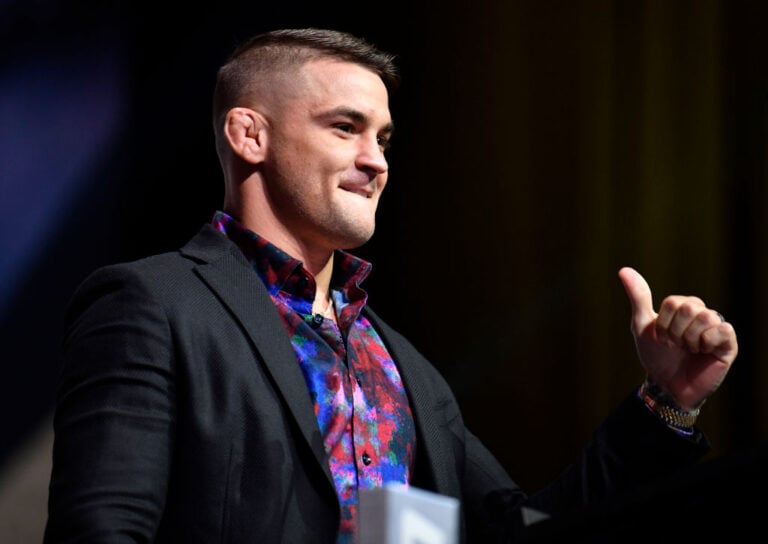 Dustin Poirier does not see his massive title fight against Charles Oliveira on Saturday going the distance – and claims he will be the new lightweight champion.

In the bout, which will take place at the T Mobile Arena in Las Vegas, Nevada, ‘The Diamond’ will attempt to achieve his lifelong dream of becoming a UFC world champion.

Speaking in the UFC 269 Countdown video, Poirier admitted that he doesn’t expect this battle to go the distance.

He said: “At the end of the round, I’m the undisputed world champion, and I don’t think this fight is going five rounds.”

The Louisiana man is renowned for his destructive power, and he’s looking to detonate his famous bombs on the champion’s chin. However, Oliveira isn’t an opponent that the American can afford to take lightly.

The UFC world titleholder won the vacant belt in his last bout with Michael Chandler. The 32-year-old had endured a torrid opening round before ultimately turning the contest on its head in the second segment with a massive left hook that ended proceedings.

But that doesn’t mean that he’s the favourite against Poirier. The American is considered by many to be the champion without the belt following his highlight-reel finishes against Conor McGregor.

Poirier added in the UFC 269 Countdown video: “My star has definitely grown tremendously, but for me, it’s not hard to stay centred and stay focused. That’s what got me here, and that’s what’s going to keep me here. I love the support, and I do like it when people recognise the work that I put in. I had a tough road to get here.”

How will the fight play out?

The contest is highly intriguing. Most expect the American’s superior power to be enough to finish the champion, but it seems UFC enthusiasts are dismissing Oliveira’s talent. The Brazilian is riding a nine-fight win streak and has looked nothing short of spectacular in recent times.

However, the story that fans care about the most is Poirier’s. ‘The Diamond’ is potentially the greatest fighter in the sport’s history to have never won a world title. He has a chance to put that right this weekend, but it’s not going to be easy.

The lightweight has been through an extreme amount of adversity. Despite his losses, he’s never once considered giving up on his dreams. He’s provided spectators with some incredible wars and entertained fans worldwide with his amazing displays.

On Saturday night, he’ll put his body on the line once again as he looks to solidify his legacy.

British fans will have to set their alarm clocks bright and early, as the main card starts at 3am in the early hours of Sunday morning.

MMA enthusiasts around the country will be watching BT Sport 2 to see if the American can get his fairytale ending or the champion can cause a monumental upset.