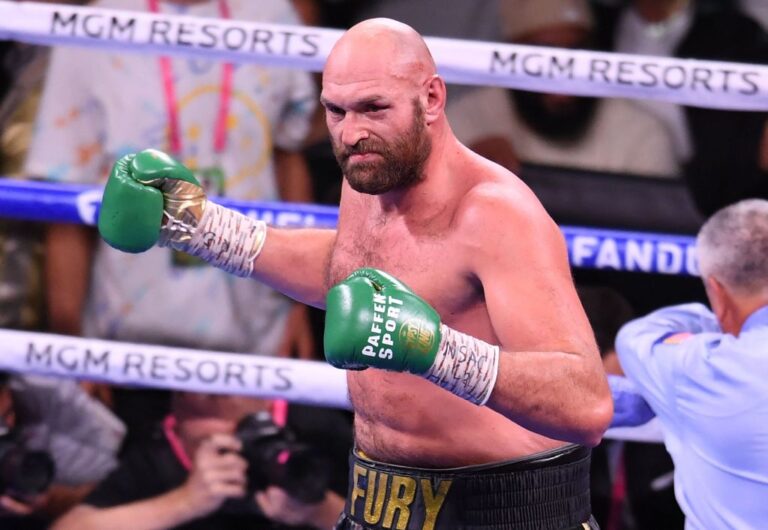 Tyson Fury is already looking for his next fight following his astonishing war with Deontay Wilder in October.

The ‘Gypsy King’ rose from the canvas on two separate occasions to overcome the biggest puncher in boxing history. But now, the Morecambe fan must refocus, as there are plenty more challengers who are desperate to relieve him from his place on the heavyweight throne.

No official announcement has been made on the WBC Champion’s next move – leaving the entire world excited to see which route he takes.

Fury’s promoter, Bob Arum, has even begun discussing how a fantasy fight with ‘Iron Mike’ would’ve played out. In an interview with talkSPORT, the American claimed that the ‘Furious One’ would have destroyed a prime Tyson.

He said: “Well, there’s no contest. Tyson Fury would beat him. He’s way too big for him. What’s Mike Tyson going to do, jump up and land a punch on Tyson Fury?”

“Heavyweights now are so tall and agile, which they weren’t before, that smaller heavyweights like Mike Tyson wouldn’t be competitive with him.”

His comments may anger hardcore boxing fans, some of whom still believe that Tyson is the greatest heavyweight that ever lived. However, many will also agree with the 89-year-old’s assessment of the bout.

Ultimately, it’s impossible to say who would have won a super fight between the pair. It could be argued that the American’s agility on the front foot would be enough to unsettle the 6ft 9in giant, who has struggled with smaller heavyweights. But on the other hand, the Brit’s terrific speed and boxing IQ would likely have had Tyson punching shadows.

The pair may one day fight in an exhibition, but for now, the lineal heavyweight king has to focus on the legitimate top contenders in his division.

We’ve taken a look at the three most likely candidates that Tyson Fury could go up against in his next fight.

‘The Body Snatcher’ has been awaiting his world title fight for what seems like a lifetime. His road towards his elusive shot at the WBC Championship has been nothing short of remarkable.

He initially claimed the number one spot by outpointing Robert Helenius in 2017. But it wasn’t until he fought Lucas Browne that the public realised that he had the elite level ability.

His terrifying stoppage win over ‘Big Daddy’ was just the start of the sensational run he would go on. In his next three outings, he defeated Joseph Parker, rubberstamped his rivalry with a stunning knockout over Dereck Chisora, and outpointed Oscar Rivas.

It seemed that his super fight was on the horizon until he suffered a shocking knockout defeat to Alexander Povetkin. The ageing Russian lifted Whyte off his feet with a brutal uppercut that rendered the Brixton man unconscious.

In the rematch, the Jamaican born heavyweight returned to his best and won the bout via a fourth-round TKO.

As of today, ‘The Body Snatcher’ has been the WBC number one contender for 1499 days. But, he may have to wait even longer due to an ongoing legal battle with the sanctioning body. This issue could prevent him from getting his shot at Fury entirely.

It appears that Whyte has been unlucky. However, he has turned down opportunities in the past. The Londoner was offered two final eliminators with Luis Ortiz and Kubrat Pulev. He also shockingly dismissed a £4 milllion offer to fight Anthony Joshua for the three belts that he held at the time. He may still kick himself for this, as Andy Ruiz stepped in that night and caused one of the biggest upsets in boxing history.

Although a fight with Fury isn’t contractually guaranteed, he may still get his wish. The ‘Gypsy King’ has previously expressed an interest in fighting Whyte.

In all likelihood, the reigning champion would be a huge favourite. His movement would almost definitely leave the slow-footed Whyte in a world of trouble. However, if Whyte could begin to land to the body and find a home for his notorious left hook, there could be a new king in the heavyweight division.

The new unified heavyweight champion looked nothing short of sensational as he moved with stunning fluidity to outbox and bamboozle Anthony Joshua.

However, with a rematch clause in place, it seemed unlikely that the Ukrainian would be lined up to be the next fight for Tyson Fury. But surprisingly, Eddie Hearn has begun discussions for the Londoner to step aside to allow an incredible undisputed title bout between Usyk and the WBC champion.

The Matchroom Boxing promoter told Boxing King Media that Joshua is considering all his options.

He said: “He just wants to fight Usyk. But if there’s a route, an offer that makes sense, we’ll see.”

It genuinely seems like this monumental battle between the slickest heavyweights of the modern era may take place.

In an interview with the Rich Eisen Show, Arum has claimed that negotiations have begun to stage this monstrous event in Saudi Arabia.

A sporting contest between Usyk and Fury gets boxing fans positively salivating.

On paper, the fight seems so difficult to predict. Both men present a puzzle that a combined 47 other fighters haven’t solved. Their innate ability to overcome any obstacle in their path has been mesmerising to watch, but when they step in the ring together, as the old saying goes, someone’s zero has got to go.

The Putney-based boxer is a relentless pressure fighter with a granite chin, which has been seemingly invincible to the punches coming back at it.

Joyce has shared many hard rounds with Fury in the gym, which has given him confidence. He now believes that he could beat the ‘Furious One’ under the bright lights.

Joyce tweeted: “I have got lots of respect for Tyson Fury as a friend and as a fighter. But my schedule is free in February.”

Joyce is teamed with Frank Warren and BT Sport in the UK, making a fight easy to put together. The Olympic silver medalist is ranked highly with all the sanctioning bodies and is coming off two big wins against Carlos Takam and Daniel Dubois.

The’ Juggernaut’ will likely get the call if Fury can’t get his two preferred options in the ring.

Does there have to be a next fight for Tyson Fury?

There comes a time in every athlete’s career where they begin to slow down, and Father time rears its ugly head.

Fury isn’t there yet, but at 33 years old, he can’t go on forever. The Brit has achieved everything there is to accomplish in the sport. So is there a need to carry on?

His rise back from the depths of depression was beyond inspirational. If he had never fought again, just getting healthy would have been an achievement. But to fly to America and beat the most fearsome puncher in the history of the human race is simply miraculous.

We don’t know who Fury will fight next, but if he does choose to hang up the gloves, then his legacy has already been assured.