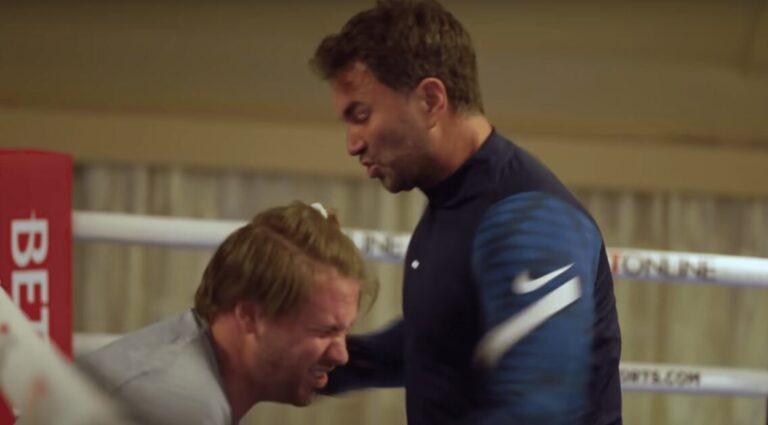 New footage posted by Matchroom Boxing has shown Eddie Hearn in a boxing ring – and the results are sensational.

In a drastic change from his usual role as a promoter at Matchroom, Hearn decided to step inside the ring himself. He took on Matchroom CEO Frank Smith in a sparring session.

The footage begins with Hearn dressed in a blue and grey top, throwing shadow punches. Smith, dressed in all grey, soon joined him in the ring.

The beginning of the session seemed relatively even, with both Hearn and Smith easing into their work. But then the Matchroom chairman began to take control.

Hearn lands several severe shots to his opponent’s body before pinning him into the corner and continuing the onslaught.

A further body shot became too much for Smith. He crumpled to the ground and looked in absolute agony.

But to the Matchroom’s CEO’s credit, he rose to the feet and landed a body shot of his own on Hearn as the sparring session ended.

Has Eddie Hearn ever boxed before?

Yes. Eddie Hearn is no stranger to the boxing ring. He competed in several amateur fights before becoming a boxing promoter for the likes of Anthony Joshua.

And that certainly showed in his sparring session with Smith. Although not a seasoned professional, Hearn proved he has plenty of ability when it comes to boxing. He also had a nickname.

Explaining his previous career choices in an interview with Evening Standard News, he revealed: “My friends used to call me that. Because you guys, Americans might need to know, I did have a couple of amateur bouts. I was absolutely terrible.

There you have it, then. Eddie Hearn does at least know his way around part of the boxing ring – and the proof is in the video.