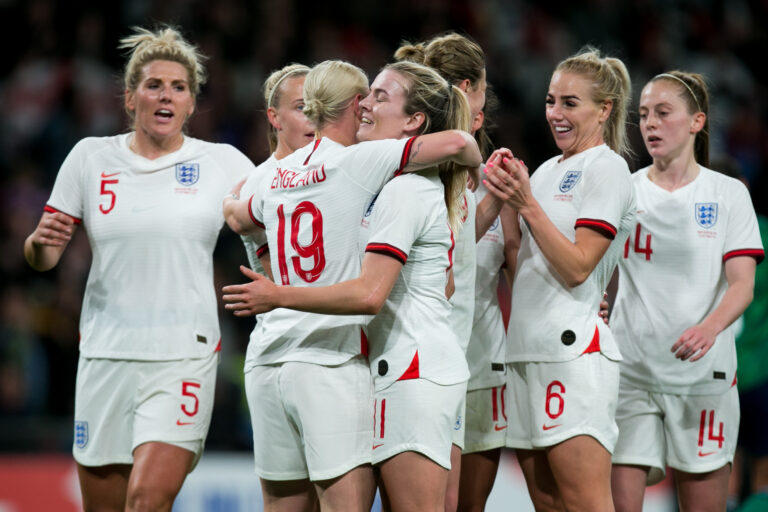 England smashed 10 goals without reply past Latvia in Women’s World Cup qualifying on Tuesday to take their total goal tally to 32 from just four group matches.

Their other results so far have included an 8-0 demolition of North Macedonia and another 10-0 victory against Luxembourg.

Last night, Sarina Weigman’s side recorded an astonishing 58 shots – with 21 of those on target – as well as 78% ball possession.

Toone’s hat-trick takes her senior international tally to five goals from six games, having made her debut back in February against Northern Ireland.

The Lionesses remain top of their qualifying group, two points ahead of second-placed Austria. The two sides face off at Wembley on November 27.

The size of the scoreline in the Latvia victory did create some debate about the competitiveness of the World Cup qualifiers when it comes to playing against the weaker nations – a debate similarly had after the England men’s team defeated minnows San Marino 5-0 last year.

Chelsea manager Emma Hayes – who was on commentary duty for ITV Sport – believes that smaller nations need more investment from UEFA in order to be able to better compete.

She said (quotes via The Athletic): “UEFA needs to invest more in the smaller nations and grow the game worldwide. England can only beat what’s in front of them, but we don’t want to be watching games which are cricket scores.”

“A team like Latvia needs more funding, more support, probably a better calendar schedule. Latvia have defended for their lives in the second half as best they can.

“It’s all about what FIFA and UEFA can do to divert funds to grow countries like Latvia and their leagues. Maybe have something like the Nations League in the men’s game – something needs to be done – 10-0 games are not good for the game.”