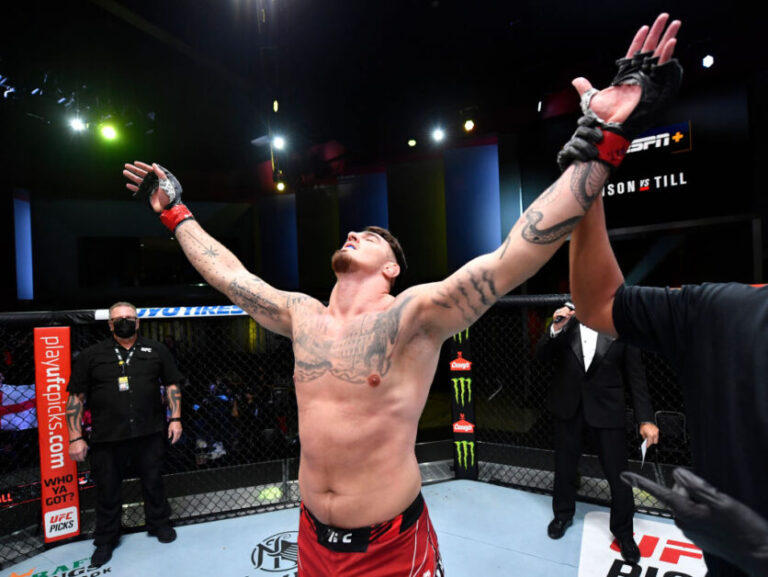 Get ready fight fans, the UFC is coming back to Britain.

For the first time since 2019, the world’s best fighters will be returning to London’s 02 Arena on March 19th. Dana White confirmed UFC London 2022 earlier this week, much to the excitement of the UK’s passionate MMA fanbase.

The hype will be kicked into overdrive after the news that an English heavyweight headlines the main event.

Salford’s own Tom Aspinall headlines a UFC fight night for the first time in his career, taking on Russian veteran Alexander Volkov.

Despite rumours of a matchup vs Shamil Abdurakhimov, Aspinall will take on the No. 5 ranked heavyweight in a hotly-anticipated fight.

Aspinall vs Volkov: How they compare

Aspinall goes into the fight with an undefeated 4-0 record in the UFC. Three of his victories, including his most recent vs Sergey Spivac, have come via TKO. The other win was via submission vs Andrei Arlovski. His background in boxing makes his striking a useful tool, and his electric speed makes it difficult for opponents to see a shot coming. Volkov, however, is a formidable opponent himself.

The Russian has won three of his last four fights, losing only to interim heavyweight champion Ciryl Gane. Volkov will look to hurt Aspinall while keeping him at a distance using his slight reach advantage and technical striking ability.

Furthermore, his experience of the pressure of headlining a main event makes Volkov a tough test for Aspinall.

Fight fans can look forward to a heavyweight bout where both fighters will prefer to do battle on their feet. The pair are likely to focus on causing damage with their striking ability. Aspinall and Volkov both have their fair share of KO victories in their careers. From an entertainment standpoint, we can hope for more of the same.

Looking ahead to UFC London 2022

The card is expected to be loaded with the best fighting talent Britain has to offer. Paddy Pimblett will be fighting on March 19th, with others expected to follow. Flyweights Molly McCann and Jake Hadley may also be on the card.

Tickets go on general sale for the event on February 4th at 10 am UK time. Fight Club and O2 priority members get early access, on February 2nd. Finally, those who register their interest can get tickets from February 3rd too.

This will be an unmissable event for UK fight fans, and tickets for a night at a full capacity O2 will definitely be hot property.

Land of the heavyweights – is this the UFC’s golden generation?