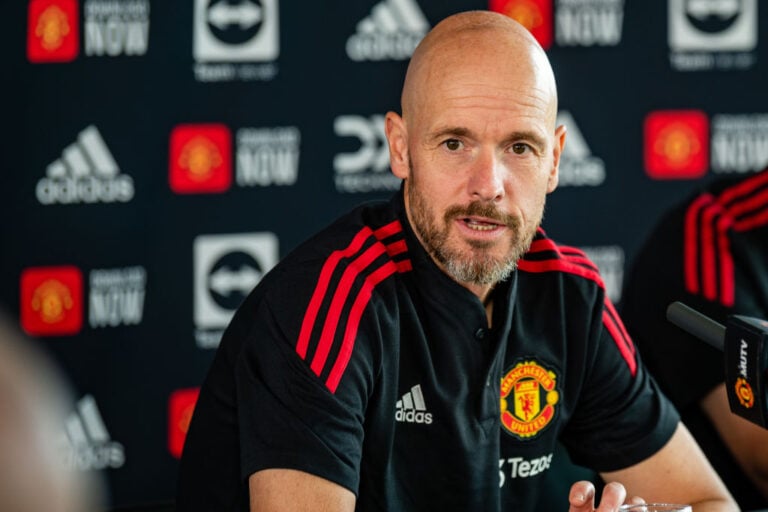 In a turn of events that caused plenty of headlines, Erik ten Hag refused to acknowledge Sky Sports reporter Gary Cotterill at the press conference ahead of Man United’s clash with Southampton on Saturday.

After starting the season in the worst possible circumstances, ‘The Red Devils’ have bit back with a vengeance. 2021/22 left a massive scar on the players, and the new Dutch manager has had to pick up the pieces. And initially, the task at hand looked too big.

United kicked the season off with a 2-1 win over Brighton, followed by a 4-0 thumping at the hands of Brentford. But somehow, Ten Hag found a way to get through to his squad.

It was up to the 52-year-old and his players to continue that momentum. And in another solid showing, United triumphed over Southampton, courtesy of a Bruno Fernandes volley.

But despite the fixture providing thrills, the main drama of the week came at the pre-match press conference.

Prior to the game, the boss spoke to the media at a press event at Carrington. However, controversy arose when the former player blanked Cotterill and looked in the other direction.

Earlier this year, the journalist travelled to the Netherlands to ask Ten Hag about joining United. In response, the then-Ajax manager blocked the camera. He also refused to answer when Cotterill asked him questions following United’s 1-0 defeat to Crystal Palace last season, before the Dutchman officially took charge.

In response, as per The Manchester Evening News, Cotterill said: “He didn’t really want to say much, did he? He’s going to have to get used to a slightly less laid-back atmosphere than they have out here in Amsterdam.”

Following the latest incident, the reporter confessed: “I’m surprised. It was just two people doing their job, but I’m assuming he was offended by it. The thing at Palace was him doing his job and not commenting and me doing my job and trying to get a comment.

“I’m only guessing that was the reason. I haven’t been told. You saw what was said but I don’t think it would be too much of a leap to assume it was about that.”