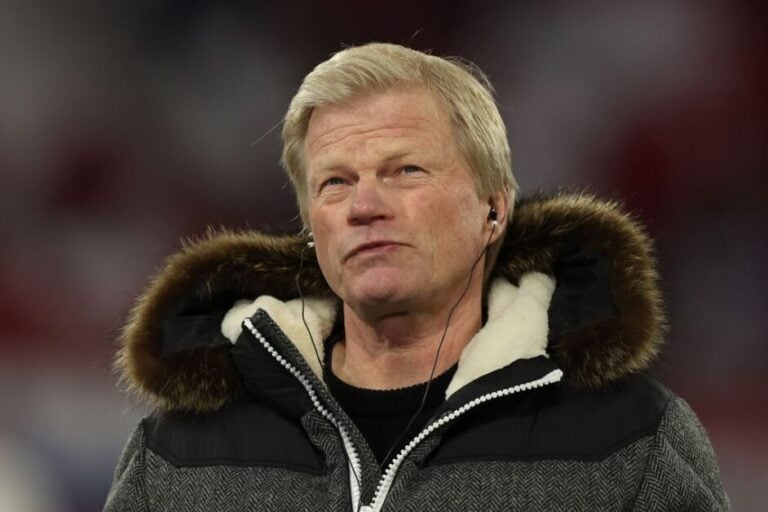 The ex-president of the Bavarians is never one to mince his words, so it comes as no surprise that Kahn and the concept are on the receiving end of his wrath. His anger stems from the potential plan to mix up Germany’s premier division.

The concept is to change the league’s format in an attempt to allow other teams to compete for the title. Bayern have won each of the last nine Bundesliga titles, and they look almost certain to retain their championship once again. The German side are currently nine points clear with just 13 games to go.

However, from a certain point of view, their reign of terror has been detrimental to the standard of entertainment in the Bundesliga. Hence, the German Football League (DFL) is exploring the idea of a revamp.

In a surprising turn of events, even though it appears unfair on Bayern, their CEO and legendary former goalkeeper backs the idea.

Oliver Kahn told Kicker magazine: “I find it exciting to think about new models such as play-offs for the Bundesliga. A format in the Bundesliga with semi-finals and finals would mean excitement for the fans. So it makes sense to play through such an idea. We at FC Bayern are always open to new ideas.”

His stance certainly hasn’t been agreed on by Hoeness.

Read: Bayer Leverkusen CEO speaks out on revenue gulf between the Premier League and the Bundesliga

Oliver Kahn feels the wrath of the ex-president

The former German international feels that the CEO’s support of the plan is pure lunacy. He believes that the idea is no more than a witch hunt against Germany’s best club.

As per Bild, he argued: “That’s his opinion – it’s not mine. I find that ridiculous. In the Bundesliga, whoever is the best after 34 matchdays and who has gone through thick and thin with his team should win the championship. That’s just a law against Bayern Munich! That has nothing to do with tension.

“The new managing director of the DFL thinks day and night about how to break the dominance of FC Bayern. And that’s when they came up with this idea. There are no play-offs in any major league in the world, not in England, not in Spain, not in Italy, not in France.”

How could the playoff concept affect Bayern Munich?

The concerns of Hoeness are perhaps well-placed. Irrespective of whether the idea would add any excitement or not, it doesn’t take away from the fact that it’s contradictory to what the league concept stands for.

The purpose of the format is to determine who the best team in the country is throughout an entire season.

With Bayern’s recent dominance over the Bundesliga, it is understandable why they would have clear reservations over the concept. Any play-off system could potentially cost them a league title that they would have secured comfortably if it was judged solely on points-per-game.