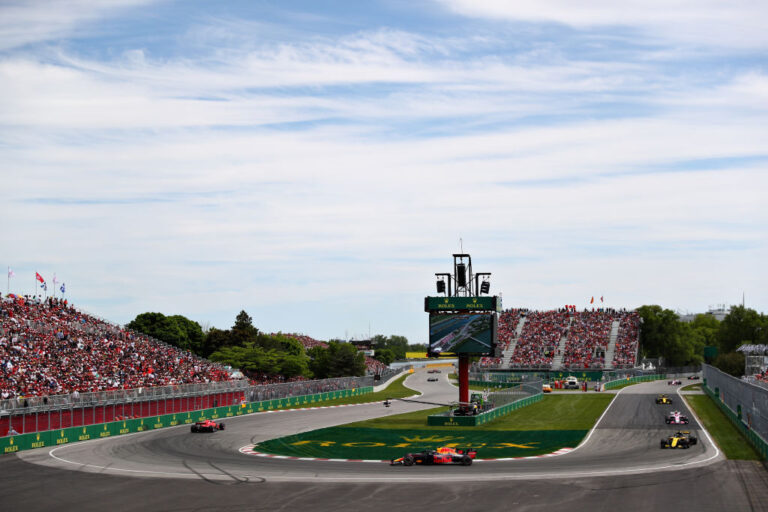 Here’s your handy guide to the upcoming Canadian Grand Prix, from the UK start time to how you can watch the highlights.

When is the Canadian Grand Prix?

The Canadian Grand Prix is the ninth race on the Formula 1 calendar and takes place on Sunday. June 19.

The 70-lap race is held in Montreal, and the Grand Prix has been part of the Formula 1 scene since 1967 at various venues.

Who are the favourites?

Ferrari, on the other hand, had a disaster. Mechanical issues with both Leclerc and Sainz saw both drivers record DNFs.

They will be looking to put that right at the Circuit Gilles Villeneuve this weekend.

Seven-time world champion Lewis Hamilton suffered back pain in Baku last weekend. It was revealed that this was due to an ongoing porpoising problem in his Mercedes car.

However, it has been reported that despite his struggles, he intends to race in Canada. ESPN reported that Hamilton “wouldn’t miss it for the world.”

As usual, the first two practice sessions will take place on Friday as the build-up begins for Sunday’s race. Practice 1 begins at 7pm BST on Friday.

This will be followed by second practice, which begins at 10pm UK time. The third practice starts at 6pm on Saturday, before qualifying at 9pm.

How to watch the Canadian Grand Prix

In the UK, the only broadcaster of Formula 1 is Sky Sports. You can live stream through NOW TV too.

The race will be broadcast on Sky Sports F1, and this channel can be added as part of the Sky Sports channels for £20 a month for new customers. Sky Sports is also available on NOW TV with a one-off day payment of £11.98. You can also pay for a month for £33.99 per month.

Unable to watch the action live? You will have to wait until Sunday morning (8.30 am) for qualifying highlights or Sunday evening (11 pm) to see the highlights on Channel 4.

You can also access the highlights on the Formula 1 YouTube channel, which will be uploaded shortly after the race concludes.