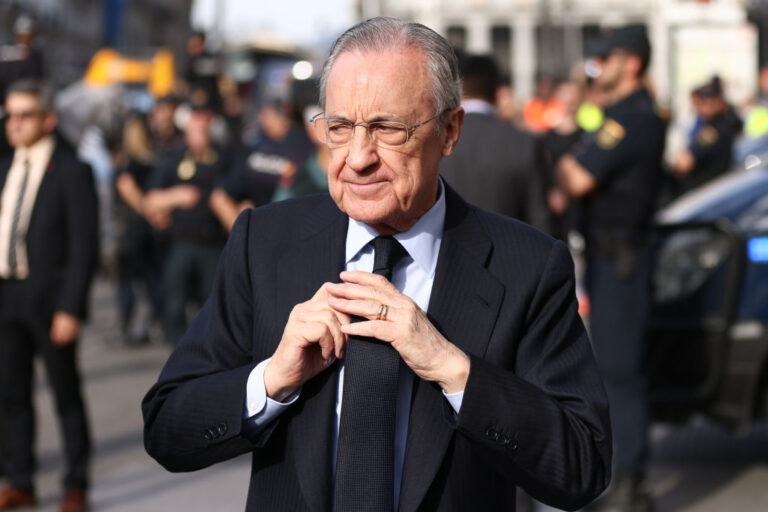 Real Madrid president Florentino Perez has questioned Kylian Mbappe after he opted to stay at Paris Saint-Germain rather than move to the Spanish capital.

Mbappe’s transfer saga with Real Madrid went on for nearly two seasons, and it always looked likely that the Frenchman would move to Madrid eventually.

It was reported on multiple occasions that the World Cup winner would be joining Los Blancos this summer. However, it wasn’t to be.

Mbappe turned down a move to Real Madrid in favour of signing a new lucrative contract with PSG. The Frenchman put pen to paper on a deal that would see him earn £650,000 a week.

The deal extended his stay in the French capital to 2025 and gave him an eyewatering £126 million signing-on bonus. He also has control over his image rights.

With Mbappe seemingly set for a Real Madrid move, he had performed a dramatic U-turn.

Real Madrid President Florentino Perez recently conducted an interview on the Spanish television program El Chiringuito and shared his views on the Kylian Mbappe saga for the first time.

As reported by Marca, he said: “His dream was to play at Real Madrid, we wanted to do it last August, and they didn’t let him leave. He kept saying he wanted to play at Madrid and like 15 days before he changed the situation.

“This is not the Mbappe I wanted to bring. He is another one, who must have changed his dream. He changes, he is offered other things, he is pressured, and he is already another footballer. There is no one at Real Madrid above the club.

“He is a great player. He can win more than others, but it is a collective sport, and we have values and principles that we cannot change.

“The Mbappe who was going to come here is not this one. If it is, I prefer him to stay at Paris Saint-Germain. I want the one with the dream. Impossible in three years? In three years’ time, we’ll all be bald? This Mbappe is not my Mbappe.”

What do Perez’s comments mean for Kylian Mbappe?

Perez is clearly annoyed at not getting his target. Often, if Real Madrid comes calling, they get the player they want.

What is clear, however, is that, in the near future, Mbappe will not be donning the Real Madrid shirt. But, with the Frenchman still just 23 years of age, who knows what the future could hold.