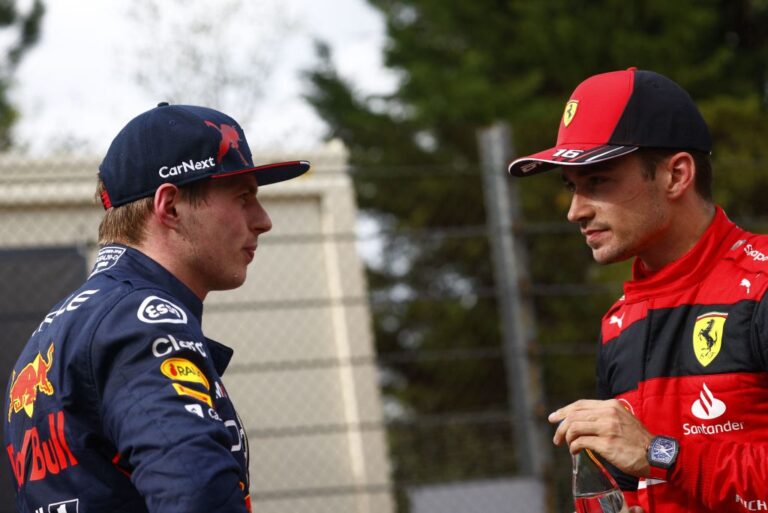 It’s a big weekend for F1 fans as the drivers fly to the United States for the inaugural Miami Grand Prix, and we’ve got everything you need, including the UK start time.

With the sport growing rapidly, the locations in which the races take place are growing every year. However, despite the obvious reason behind the heavy marketing push, some F1 aficionados aren’t too happy. They adore the classic race tracks they’ve come to know and love over the years.

And with the introduction of these new races, fans fear that their favourites may be getting pushed to the wayside.

But regardless, the organisers are pushing through with their US takeover. And spectators in their thousands will flock down to Florida to watch the prestigious sporting event take place, with many more excitedly watching on from home.

The stage is set for the latest chapter in the Charles Leclerc – Max Verstappen rivalry. So far, the Monegasque leads the championship standings. However, the reigning champion isn’t far behind. A win could see him turn the tables on the 24-year-old.

We’re bringing you all the information you need to know to make sure you can catch every second of the action.

What is the Miami Grand Prix UK start time?

The first practice session begins on Friday, May 6 at 7:30pm UK time, with the second taking place at 10:30pm.

The final practice goes down a day later at 6pm, with the drivers going into qualifying at 9pm.

Then, it is time for the main event. The Miami Grand Prix race proper will take place on Sunday at 8:30pm.

How can I watch the Miami Grand Prix?

The race is available to watch live on Sky Sports F1. The dedicated channel has borderline-exclusive live television rights in the UK for this season and the foreseeable future.

Non-subscribers can purchase a Sky Sports F1 package which gives them unlimited access to the channel for an extra fee of £18 a month on top of their original Sky subscription. Alternatively, users can upgrade to all eight Sky Sports channels for £25 a month.

The race can also be streamed through NOW TV. A day + mobile month membership is available for £11.98, which gives you 24-hour access to Sky Sports channels. Alternatively, you can pay for a sports membership. It costs £20 per month for three months, and £5 per month thereafter.

How can I watch Miami Grand Prix highlights?

Those who can’t watch the racing live – or do not have an active Sky Sports subscription – can tune into Channel 4 for the highlights. Their qualifying programme will commence at 8:30am on Sunday, with the highlights of the Grand Prix itself broadcasting in the early hours of Monday morning at 12:30am.