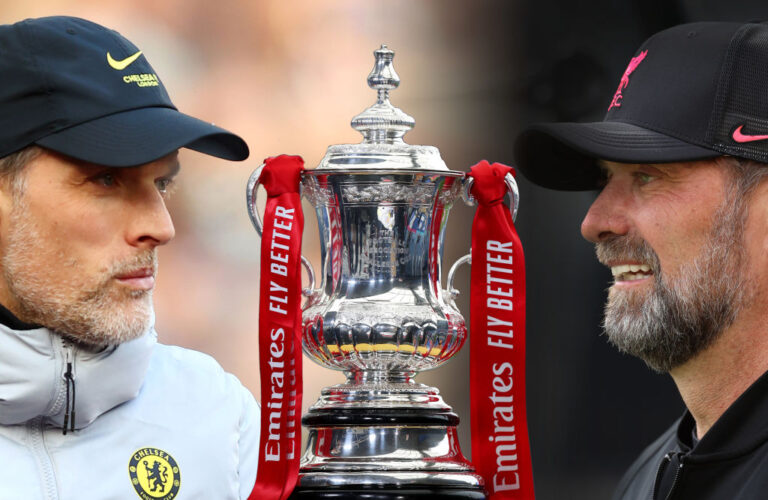 It’s almost time for the 2022 FA Cup Final between Chelsea and Liverpool, and we have all you need to know ahead of the 150th anniversary of the final, including the kick-off time.

Carabao Cup winners Liverpool are looking to continue their path towards the quadruple, an achievement that is unprecedented for an English side.

Chelsea, meanwhile, are also aiming to secure their second trophy of the season. They won the Club World Cup in February.

Both sides face each other in a domestic cup final for the second time this season, having contested the Carabao Cup Final in February.

Chelsea defeated Crystal Palace 2-0 in their FA Cup last-four tie to get to the showpiece event.

Liverpool, meanwhile, held on to beat Manchester City 3-2 in a thrilling tie.

If the Blues win, they will become the third-most successful team in FA Cup history outright, with nine wins. Liverpool could move up to joint-third on the list if they secure another domestic cup triumph.

Here is all you need to know ahead of the FA Cup Final, including the kick-off time, how to watch and team news:

What is the FA Cup Final kick-off time?

As with last year’s final, BBC Sport will have a dedicated FA Cup channel in the build-up to kick-off. They are showing memorable past finals, the competition’s most significant moments and much more. The channel, which will be available on the BBC Sport website and iPlayer, goes on air from 12pm.

How can I watch the FA Cup Final?

This year, the FA Cup Final is being broadcast by both BBC and ITV.

Viewers can tune in to BBC One (channel 101) to watch the final. Presenter Gary Lineker will be joined by pundits Alan Shearer and Micah Richards. Coverage begins at 4pm.

Alternatively, ITV will also provide complete coverage of the final, which begins at a slightly earlier time of 3:45pm. It will be available on ITV1 (channel 103, or 113 for standard definition). Mark Pougatch will be presenting the coverage. Roy Keane, Ian Wright, Joe Cole and Robbie Fowler will provide expert opinions.

ITV will also have coverage on their +1 channel (114) for those who miss the original kick-off time.

For those who cannot tune in to the final via television, talkSPORT will be providing full commentary of the FA Cup Final. Jim Proudfoot is the lead commentator, with former Republic of Ireland international Andy Townsend on co-commentary duties. The talkSPORT pre-match show begins at 1pm.

Midfield duo N’Golo Kante and Mateo Kovacic (ankle) are doubts for the final. Tuchel has said he will have to make a late decision on both players’ availability.

Meanwhile, Ben Chilwell and Callum Hudson-Odoi are definitely out of the final.

Liverpool – Midfielder Fabinho is a doubt for the FA Cup Final after suffering a muscular injury during Liverpool’s 2-1 win over Aston Villa on Wednesday.

Manager Jurgen Klopp said: “[He] will definitely be back for the [Champions League] final, and for the Chelsea final and before, we will see. I don’t know.”

Klopp otherwise has a full squad to choose from for today’s FA Cup Final.