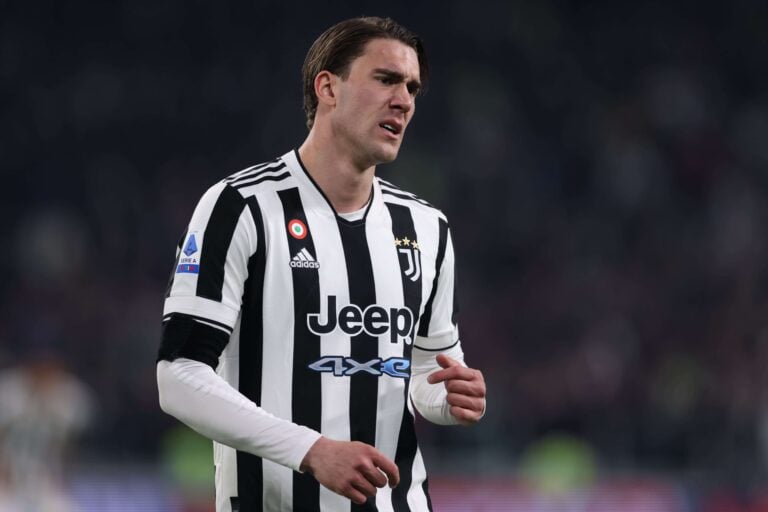 Juventus striker Dusan Vlahovic was trending on Sunday night for all the wrong reasons.

The Juve man failed to get on the scoresheet during his side’s 1-0 loss to rivals Inter Milan in the Derby d’Italia. In addition, he was lambasted on social media for a shocking dive during the game.

In a fiercely competitive match, the home side started brightest. Inter goalkeeper Samir Handanovic’s poor punch nearly resulted in a Juventus goal, with Giorgio Chiellini flicking the ball against the bar. Paulo Dybala also went close with a speculative effort in a frantic first 15 minutes.

Just before half-time, the Derby d’Italia had its defining moment. Two Juventus players challenged Inter wing-back Denzel Dumfries in the box, with the Dutchman ending up on the floor.

After a lengthy VAR check, the referee awarded the visitors a penalty. That was to the outrage of Juve manager Massimiliano Allegri.

However, the hosts felt immediately avenged as Wojciech Szczesny saved Hakan Calhanoglu’s tame spot-kick. Unfortunately, VAR intervened to further infuriate ‘The Old Lady’ by ordering a retake. Calhanoglu took full advantage of the second opportunity, powering his penalty out of reach to give Inter a highly debatable lead.

The second half was one-way traffic as Juventus peppered Inter’s goal with shots. Both Vlahovic and Paulo Dybala went close, while substitute Zakaria hit the post. Ultimately, the Inter defence and an impressive Milan Skriniar held firm to give Inter Milan a much-needed victory.

The defeat brings Juventus’ impressive 16-league game unbeaten run to an end. In addition, it puts Juve further behind in the race for this season’s Scudetto. In contrast, Inter’s win puts them just three points behind city rivals AC Milan and second-placed Napoli.

Controversy could be found wherever you turned during the game – including some unfortunate simulation from Vlahovic.

In a clip captured by the slow-motion cameras, Vlahovic appears to be flicked in the face by Inter defender Danilo D’Ambrosio. The Italian is not even looking at Vlahovic, potentially gesturing to a teammate.

Following the flick, Vlahovic glances at D’Ambrosio briefly. Then, rather hilariously, the striker collapses to the ground, clutching his face as he falls.

The dive did not impress fans on social media.

Not afraid to speak their minds, Reddit users quickly called out the Serbian’s simulation.

“Absolutely no shame. Are there no fines, or does he not have to answer for this type of thing??” wrote one unimpressed user.

Another user echoed those thoughts: “Holy s**t, this is so pathetic.”

Meanwhile, other fans took the opportunity to question how diving in general goes unpunished.

“Respect lost for this guy,” wrote another. “This s**t has got to stop. Players can’t think they can get away with this s**t with a million cameras around.”

It’s safe to say that Dusan Vlahovic did not gain any new fans following his bizarre actions on the pitch last night.