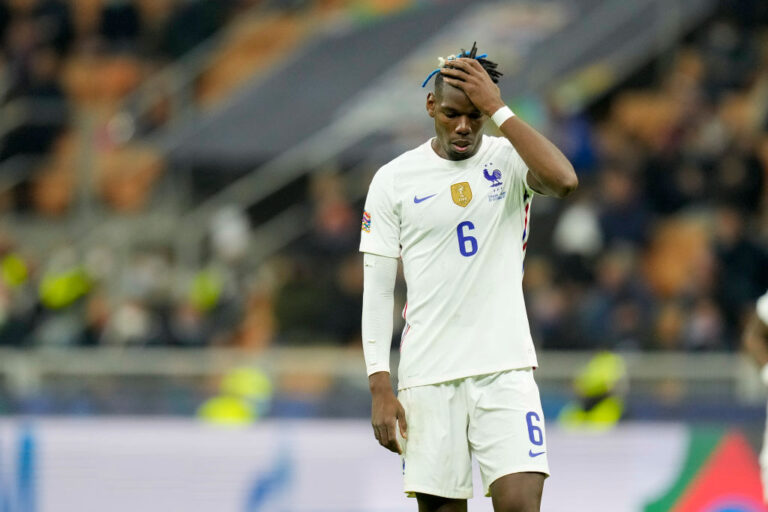 Man United fans are finally ready to give up on Paul Pogba following the Frenchman’s latest comments whilst on international duty.

Speculation on Pogba leaving Old Trafford has been unending for years. Every season, the midfielder is linked with a move away from United to somewhere on the continent, with several Champions League sides chasing his signature.

This season, speculation has intensified as Pogba’s contract is due to expire in the summer. In addition, Man United do not seem close to agreeing to an extension with Paul Pogba.

As a result, several clubs are chasing the World Cup winner. Long-time admirers Paris Saint-Germain and Real Madrid are favourites to win the race for his signature. Pogba’s former side Juventus are in the running too.

Sky Sports also report that two Premier League clubs have contacted Pogba’s management team over a controversial move to stay in England. Rumours suggest Newcastle and Aston Villa are the two interested sides. However, these two teams are not confirmed.

Following his latest interview with the French show ‘Telefoot’, Man United fans may not be sad to see Paul Pogba go.

In the interview, Pogba expressed his disappointment at how the season has gone for the Red Devils.

“The season is not over yet, but almost because we don’t have any more titles to play for,” he said, as quoted by the Daily Mail. “I want to win titles, to play for something and this year and the last few years, we haven’t won a title. It’s sad.”

When asked if international duty was a ‘breath of fresh air,’ the Frenchman responded candidly. “Totally. That’s the truth. There were difficult moments at United, and I needed this break to regain my energy and confidence.

“Sometimes when I wasn’t playing or the results weren’t good, coming here gives me a boost, a breath of fresh air that also helps me to come back well to my club.”

Supporters did not react kindly to the comments.

In a Reddit thread reacting to the interview, the overwhelming response from United fans was not good.

One Redditor hopes that the Red Devils won’t offer Pogba a new contract: “This man on insane wages, available for half the year and when available barely shows up is the one to talk! 2 more months, I’d be genuinely p****d if he was given a new deal!”

Another lamented his constant moaning while with the France squad. “He literally sulks about Man United every time he’s on international duty,” wrote the frustrated fan. “Just let him go, unreal talent on his day but no passion for the club.”

Fed-up supporters are ready for the World Cup winner to leave.

“So ready for Pogba to be gone. Just don’t wanna hear about this s**t anymore,” wrote one user.

Finally, this one commenter sums up the sentiment of the thread: “Ooh, just f**k off somewhere else, you crumpet.”

After a mixed six-year stint at Old Trafford, it is safe to say that a section of Man United fans will be happy to see the back of Paul Pogba.