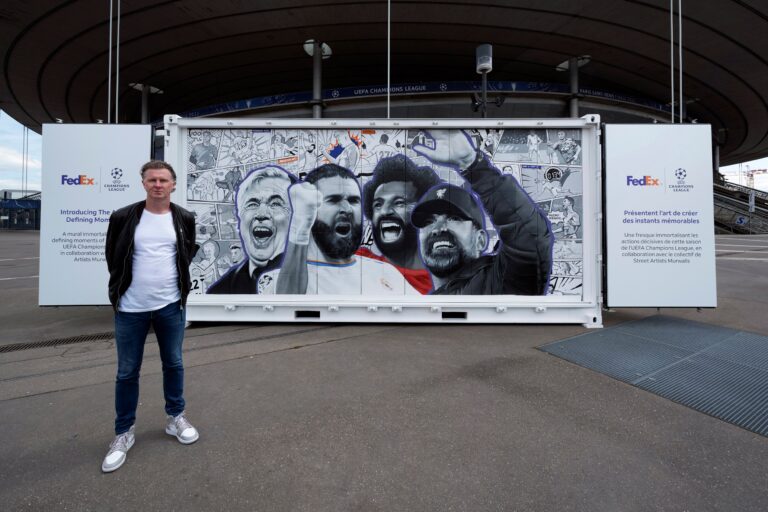 Fans attending the Champions League final on Saturday night will be treated to a spectacular work of art on their way into the Stade De France.

Liverpool and Real Madrid go toe-to-toe for the trophy in a repeat of the 2018 final. Protagonists from each team feature prominently on the aforementioned mural created by competition sponsor FedEx. Depictions of Carlo Ancelotti and Karim Benzema represent Real Madrid while Klopp and Salah star as the Liverpool titans.

Behind that quartet, the most significant moments of this campaign feature in comic-book panels. Among the highlights are Benzema’s Panenka penalty against Manchester City and the bicycle kick Robert Lewandowski scored versus Dynamo Kyiv.

FedEx call the Champions League mural ‘The Art of Defining Moments’. Famous street artist MurWalls was a key collaborator in the project, painting onto a wall of around 200 FedEx boxes. They carefully connected boxes and housed them in a shipping container in order to form the canvas. A man with a connection to both teams unveiled the artwork.

Steve McManaman played for Liverpool and Real Madrid, winning two UCL titles with the latter. The BT Sport commentator even scored in the 2000 showpiece, contributing to a 3-0 Real Madrid victory over Valencia. It capped off a dream debut season in Spain.

McManaman highlighted one moment in particular that he was happy to see on the Champions League mural: David Alaba’s chair dance.

In the midst of the insane comeback celebrations against Paris Saint-Germain, Alaba picked up what looked like a lawn chair and waved it around in the air.

This act provoked memes and widespread delight from fans and pundits alike.

The last meeting between these clubs

It being so unusual to meet repeatedly in a Champions League final in the space of a few short years, the 2018 battle between Liverpool and Real Madrid is getting a lot of attention. However, the pair met more recently than that.

Last season, Los Blancos played The Reds in the quarter-finals.

Liverpool endured a tough season due to the absence of key players like Virgil van Dijk. The Dutch defender was absent for the tie, which Liverpool lost 3-1 on aggregate.