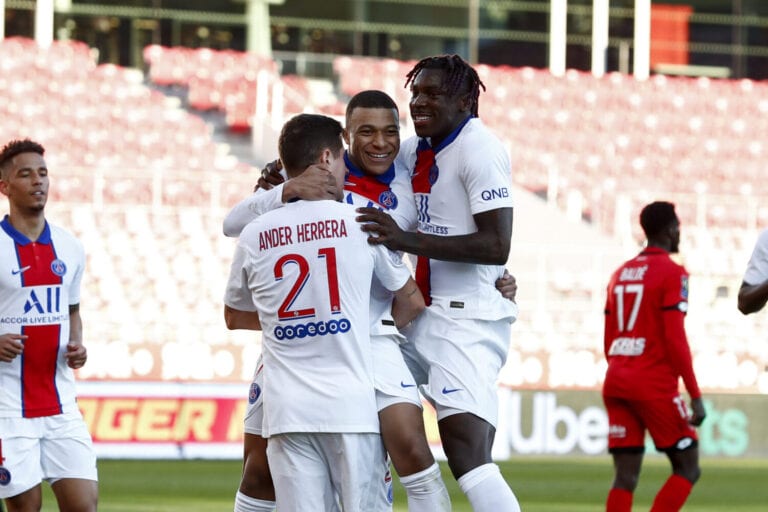 Paris Saint-Germain striker Kylian Mbappe could be the star man in a blockbuster Team of the Week 23, which is set to be unveiled on Wednesday evening.

The Frenchman scored twice in a 4-0 victory at bottom club Dijon, as Mauricio Pochettino’s side kept the pressure on Ligue 1 leaders Lille.

They sit two points behind the table toppers with 11 games still to play.

Below, we’ve taken a look at some other names that could be included in Team of the Week 23:

Gareth Bale marked his first league start for a month with an impressive display against Burnley.

The forward starred in Tottenham’s 4-0 win, opening the scoring inside two minutes before assisting Harry Kane for Spurs’ second goal of the afternoon.

Bale completed a brace for himself with a first-time left-footed shot which curled inside Nick Pope’s far post.

There are a number of names that could be chosen after Bayern Munich‘s 5-1 demolition of FC Koln in the Bundesliga on Saturday.

Robert Lewandowski added yet another brace, whilst Serge Gnabry also scored twice off the bench.

We’ve gone for Leon Goretzka. The German midfielder provided three assists during the victory and was the WhoScored star man with a 9.0 rating.

Myron Boadu made it five goals in two games as he scored a hat-trick in AZ Alkmaar’s 4-2 win over Feyenoord.

The victory takes AZ up to third, only two points behind second-placed PSV Eindhoven. 20-year-old Boadu now has 11 goals for the season.

Manchester City‘s centre backs stole the headlines again during their 2-1 win over West Ham on Saturday – but this time for their attacking exploits.

Ruben Dias opened the scoring with his first goal in a City shirt during the game. He met Kevin de Bruyne‘s inch-perfect cross with a powerful header that went beyond Hammers’ keeper Darren Randolph.

His defensive partner John Stones also scored and put in an impressive display, but given the England international’s previous inclusion in TOTW21, Dias will get the nod for Team of the Week 23 should EA choose a City centre-back.