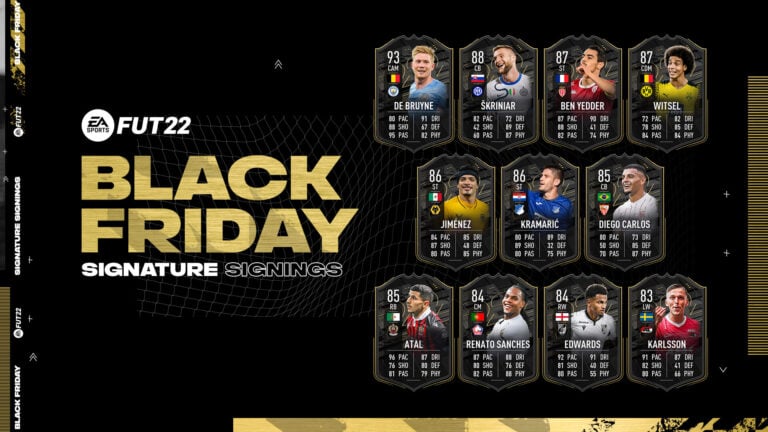 Each year, EA Sports release a number of special SBCs, items and packs at different times throughout Black Friday.

On FIFA 21, EA unveiled the ‘Record Breaker’ promo, celebrating specific players who have made history in the footballing world by giving them permanent upgrades.

There were also a number of Flash SBCs that went live between Friday and Sunday, as well as special packs and playable Black Friday objectives.

Let’s see what the promo has in store this time around:

This afternoon, players can get stuck in with an entirely new addition to the game – Signature Signings.

The promo will celebrate some of football’s most successful transfers in recent history, and is available from 2pm UK time.

Here is the full team:

EA kicked off FIFA 22 Black Friday on Thursday evening, with a ‘Best of TOTW’ release including the likes of Mohamed Salah and Kylian Mbappe.

There will also be the traditional Flash SBCs until Sunday, as well as engagement streak rewards and week-long objectives.

You can learn more about this year’s Black Friday promo via EA’s official website.