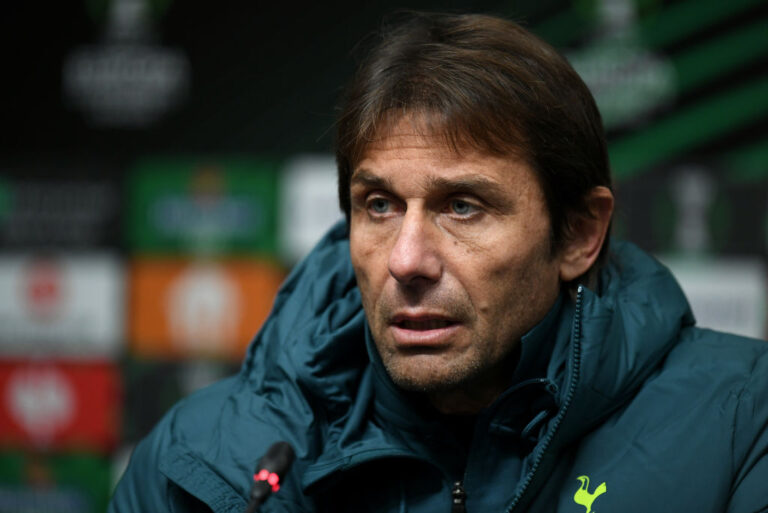 The London side’s travelling fans were rendered speechless, as they were handed a humiliating 2-1 defeat in the Europa Conference League.

Slovenia’s fifth-best side dispatched of Conte’s 10-man team in the dying seconds of a game that the away contingent will hope to forget.

Read: Three Spurs players who will be essential to Antonio Conte’s style of play

What did Conte say?

The Italian was deeply disappointed about the result, and he had no issue with expressing his unfiltered opinion. He claimed the level is currently “not so high” at Spurs.

Conte said (via Sky Sports): “I must be honest and tell you that after three weeks, I am starting to understand the situation. It is not simple. At this moment, the level at Tottenham is not so high.”

“There is an important gap to the top teams in England. Of this, we must not be scared. I am here to work, here to improve the situation. At this moment, we need to have patience. I am here because I know there are problems to solve.”

“After three-and-a-half weeks, I am happy to stay here. But at the same time, I must be honest and tell you we need to work a lot to improve the quality of the [current] squad.”

“Some people think Conte won in the past, so therefore I am a magician. But the only magic I can do is to work.”

Conte has hinted there may be deficiencies in the squad that could prevent him from achieving his goals at the club, even with maximum work.

The Italian said: “We have a lot of desire to work, but you can work, work, work. But you can push a car at maximum level, and sometimes it is not enough to be competitive.”

“This road could be one metre or 100 metres. I am not scared, I am ready to go and do this path. But at the same time, I want to be very honest, we have to work a lot and improve in many, many aspects.”

Who could be brought in?

It is clear that Conte is not happy with the current standard of his squad.

The North London club have not performed well in the league this season. They currently sit in seventh place, and the last thing the fans want is another stint in the Europa Conference League. Therefore Conte will have to be a busy man in January and indeed the summer to secure some new blood that can prevent this from happening.

Here’s three players we think could make an immediate impact at the Tottenham Hotspur Stadium:

Milan Skriniar has been a staple of Inter Milan’s defence since he joined the club in 2017. As per FCInterNews, the Italian giants would be willing to let the centre-back fly his wings elsewhere if they were to receive the right asking price.

Škriniar is a born leader on the football pitch. His natural tackling ability, as well as his positional sense and ability in the air, makes any defence he plays in almost impenetrable.

If there’s any team that could prize him away from Inter, it could perhaps be Tottenham, given the Conte connection.

Škriniar played under the Italian last season, and he was an instrumental part of the Serie A-winning side. His relationship with his former boss could be enough to drag the 26-year-old to the Premier League.

Tottenham are in desperate need of a leader, and the Slovakian would definitely be that. Not only would he drastically improve Spurs’ defence, but he would also help mentor the likes of Japhet Tanganga.

Although the defensive midfielder is linked to a move to Old Trafford, there is still a chance that he could look elsewhere. Manchester United have been looking at an array of midfielders to bring in, but even if the club overlooks Neves, he may still want to move on from Wolves anyway.

The Portuguese man would be a fantastic addition to the Spurs squad. His accurate passing skill, sharp vision and excellent first touch would all but guarantee him a place in Tottenham’s starting XI.

The 24-year-old could form a partnership with Pierre-Emile Højbjerg, and if the pair could develop good chemistry, then the club’s midfield could begin to tick better than ever before.

The Wolves star isn’t afraid to push forward and attack either. His presence in the side could be hugely beneficial for Tottenham’s overall goal tally next season.

Raphinha has been one of the saving graces at Elland Road this season. The 24-year-old has scored five times in his ten appearances for Leeds this campaign, and that total only looks likely to increase.

The Brazilian’s vast array of slick and skilful tricks bamboozle defenders and make him an excellent asset to any of England’s premier sides. He would fit perfectly in Tottenham’s starting XI beside Son Heung-min and just behind Harry Kane.

The pair of attacking midfielders could link together nicely to create a wide array of attacks and passes to benefit England’s number one striker.

What does the future hold for Tottenham?

Spurs haven’t had the greatest start to the season, and that doesn’t look likely to change in the immediate future. However, given time Conte may be able to turn that around. As he begins to implement his structure and tactics on the squad, things should gradually improve.

But this doesn’t mean that the Italian can rest on his laurels. It is of paramount importance that his club invests in some essential signings in January and indeed the end of the season. Škriniar, Neves and Raphinha would all provide a service for Tottenham in an area that they are lacking. Therefore, it is integral that the club makes a statement and signs at least one of these players.