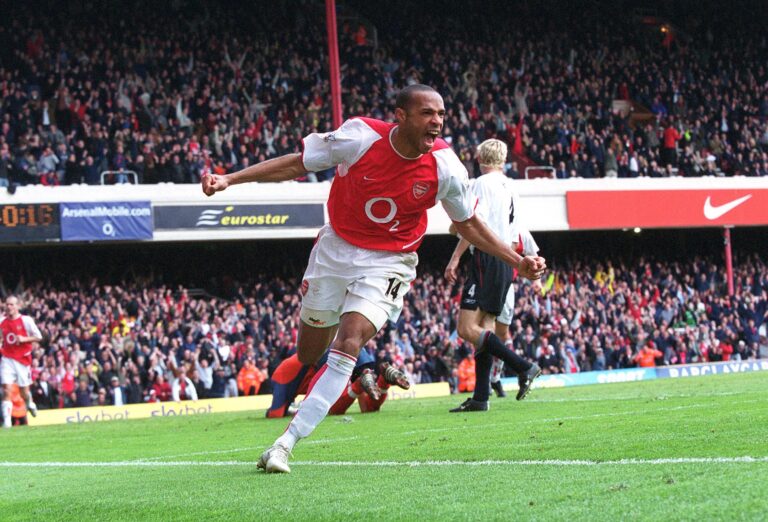 He won the Golden Boot on four separate occasions, and was named in the PFA Team of the Year for six consecutive seasons between 2000/01 and 2005/06.

Henry is one of the greatest forwards ever to grace England’s top division. His mixture of pace, strength, hold-up play and an incredible finishing instinct made him perhaps Arsene Wenger‘s greatest ever signing.

Not content with 174 Premier League goals, Henry returned for a short loan spell in 2012 and increased his tally to a round 175 with a last-minute winner against Sunderland.

By this time, Arsene Wenger’s side were well on their way to becoming just the second team to complete an invincible season in the top flight after Preston North End.

With the Gunners 1-0 up with seven minutes to play, Henry sealed yet another victory with a 25-yard effort that first looked as if it was curling towards the goalkeeper, but changed direction mid-flight and arrowed into the top corner.

It is perhaps a measure of how good this Henry goal was against Liverpool that when he received the ball, there were just three Arsenal team-mates behind him.

The forward took it all on himself. He drove forward with the ball, shrugging off Dietmar Hamann in midfield. Then, as he charged into the penalty area, Henry feigned to shoot before stepping around Jamie Carragher, opening up Liverpool’s defence. He then calmly placed the ball into the bottom corner.

Thierry Henry, as well as being an incredible finisher of chances, also knew how to take a superb set-piece. He showed that to great effect against Wigan in November 2005.

The Frenchman stepped up to take a free kick from 35 yards out with the scores at 2-1 to Arsenal. It looked like an impossible range to score from – but this was Henry.

He struck the ball perfectly, sending it over the wall and into the back of the net off the side of the left post.

When Thierry Henry got into his stride, there usually were not a lot of opportunities to stop him.

In the North London derby against Tottenham Hotspur back in 2002, Henry received the ball in his own half – and just kept running. He held off Jonathan Blondel in midfield before turning beyond Stephen Carr, jinxing inside and firing into the bottom corner. Superb.

There was only ever going to be one choice for the number one spot. Henry’s best goal? Almost certainly. The Premier League’s best goal? There’s definitely an argument for it.

It’s such a great goal that, even all this time later, you can still barely believe that the ball is going to hit the net when it arrives at Henry’s feet.

However, when the Frenchman is given the ball by Robert Pires, back to goal, he nonchalantly flicks the ball up, turns and fires it straight into the top corner on the volley.