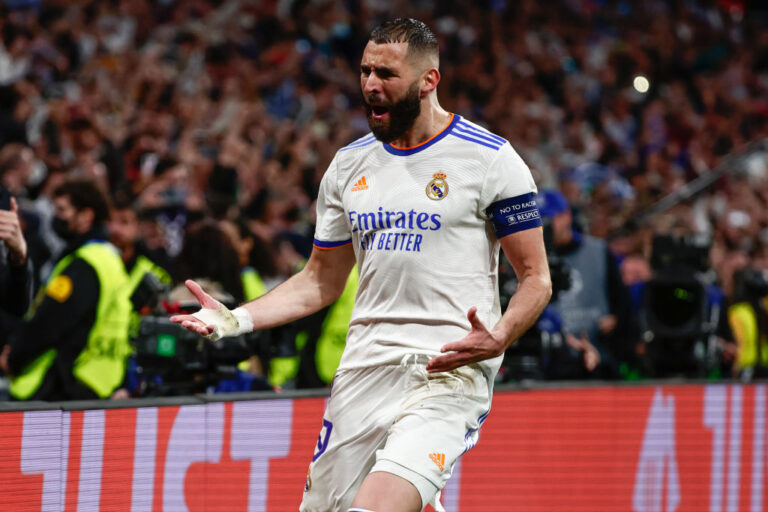 The incredible season of Karim Benzema continued last month as he secured the La Liga Player of the Month award for April – and he was rewarded with an SBC on FIFA 22 Ultimate Team in the process.

The Frenchman has been a leading light for Real Madrid this season. In addition, he is one of the favourites to win this year’s Ballon d’Or.

Benzema scored 27 goals and 12 assists in just 32 La Liga appearances. He scooped up the Golden Boot with ease, finishing nine goals ahead of second-placed Iago Aspas.

In April, the 34-year-old scored four goals in four league games, including a brace in a 2-1 win over Celta Vigo. He also netted against Espanyol and Sevilla.

The player who wins the Player of the Month award in La Liga for each month of the season receives a special card in FIFA 22. That card can be unlocked by completing an SBC.

The SBC card of Karim Benzema looks incredible. Five of his base card stats are above 80, with the standouts being 94 dribbling and 92 shooting.

He also has 84 pace, 85 physical and 88 passing. That makes him one of the best all-around strikers in the game, and a must-have for Ultimate Team users rocking La Liga or French hybrid teams.

In addition, Benzema has 97 composure, an increasingly important attribute in FIFA games. That means if you give him even a sniff of goal – just like in real life – he is unlikely to miss.

How to complete the Karim Benzema POTM SBC

To complete the Karim Benzema SBC on FIFA 22, you will need to submit the following:

The 86 rating can be achieved using various player rating formulae.

However, given the need for chemistry, it would be advisable to purchase the majority of your players from one league or nation. That means that, even if you have players out of position, the league and nation links should cover you.

This handy calculator from Futbin shows exactly what rating combinations you need to reach the magical 86 squad rating.

Finally, the high cost comes with the 87-rated players. The cheapest players will set you back around 16,000 coins each. However, you can use an 87-rated card as one of your in-form cards. Jamie Vardy, for instance, comes in at 18,000 coins, meaning the total cost for this section of the squad would be around 35,000 coins.

In total, the Karim Benzema SBC should cost you slightly upwards of 100,000 coins. Futbin’s current recommended price for the SBC comes in at 106,450 coins on PlayStation at the time of writing. It looks to be well worth the investment.