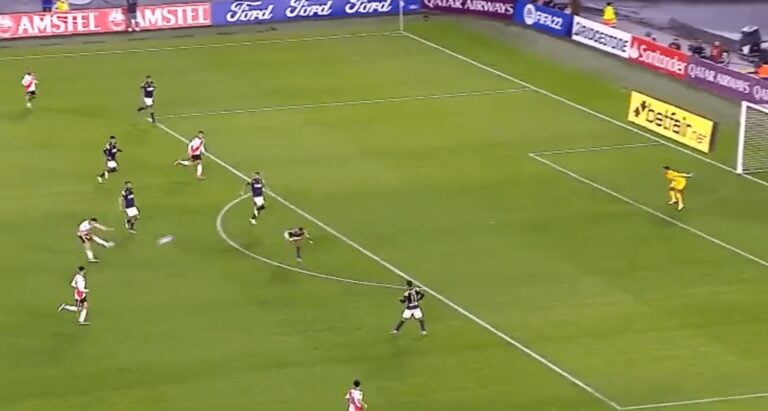 If Man City fans weren’t already excited to have signed Julian Alvarez, then they certainly will be after watching him bag an incredible six goals in a Copa Libertadores tie against Alianza Lima.

After securing the services of the 22-year-old in January from River Plate, The Citizens have eagerly awaited the introduction of the forward into the squad.

But after departing with £14 million, they agreed to send Alvarez back to the Argentinian giants on loan. With a link-up with Pep Guardiola potentially happening in the summer, it appears a certainty that he will be soon walking out under the Etihad lights.

It seems that the extra time in Argentina came as a blessing in disguise. The youngster has had the opportunity to develop his skills further in the Primera División, and has proved himself worthy of playing in the best division in world football.

The forward nicknamed ‘The Spider’ has showcased his excellent command of the ball, mobility, and innate eye for goal throughout his career to date.

He’s made a massive impact for his side this season, coming up with some of the club’s most significant moments. For example, he bagged a brace against Boca Juniors in the Argentinian Clásico and scored a hat-trick against San Lorenzo.

But on Wednesday, he went viral with a piece of footballing magic.

It’s fair to say that the blistering Argentine has proved that he has the potential to carve out a very successful career. But in a showing reminiscent of some of the game’s greats, he highlighted just how good he can be.

The in-form star took just 15 minutes to begin a destructive Copa Libertadores performance. He bolted past the defence and beat the goalkeeper in a one-on-one to put his side into the ascendancy.

But rather than give Alianza Lima a second to gather their thoughts, he quickly pounced again. Alvarez lept onto a beautiful cross and fired the ball into the back of the net to double his team’s lead.

The prospect then lay dormant for 20 minutes, before hitting an absolute thunderbolt from way outside the box.

His fourth goal highlighted his rugged determination and enthusiasm for the game. After the goalkeeper received a backpass, Alvarez applied the pressure and forced him to mistake a mistake. The 5ft 7in forward capitalised and added further embarrassment for the visitors.

Similarly to his first-half performance, once he smelled blood in the water, he couldn’t help himself. Alvarez worked his way past the defence like clockwork and lofted the ball into the top corner for his fifth goal.

And to really rub salt into the wounds, he cut through the helpless backline of the opposition again and fired a beautiful left-footed shot into the back of the net for goal number six.

The game ultimately finished 8-1. However, while the entire team received plaudits for their performance, one man clearly stood out from the pack.