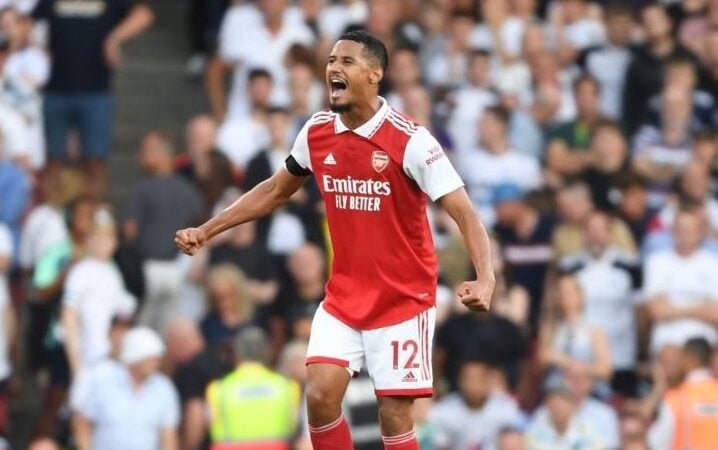 William Saliba is one of a number of young stars receiving a massive boost to their ratings on FIFA 23.

Yesterday, EA Sports dropped some more player ratings, as the hype for FIFA 23 rises. La Liga received their overalls for the upcoming game, with Karim Benzema and Robert Lewandowski leading the way in Spain.

Additionally, EA released the top 23 under-21 players on the next FIFA. Ballers from a variety of leagues make the list, but none more so than the Bundesliga. The German top flight has nine cards in the top 23, leading all other divisions.

Following close behind is La Liga, with six entries to the list. Then, the Premier League has four players in the FIFA 23 U21 rankings, with Eredivisie claiming two. Finally, Ligue 1 and Liga Portugal have a player each.

But which players have enjoyed massive upgrades?

Saliba amongst the most boosted FIFA 23 ratings

A number of promising talents from across Europe have seen significant stat increases.

Barcelona starlet Gavi actually leads the way with the largest rating boost. In FIFA 22, the Spaniard had a 70-rated silver card. Contrastingly, Gavi starts FIFA 23 with a 79-rated gold card.

Just behind the Barca player is Bayer Leverkusen’s Piero Hincapie. The defender rises from a 70 to a 78 in this year’s game. Unfortunately, his left-back gold card may be quite underwhelming in its original spot.

However, if you can move him to centre-back in-game, or if his secondary position is CB, Hincapie’s 83 pace may be useful in starter squads.

Hincapie’s Leverkusen teammate, Jeremie Frimpong, got a +7 increase to his FIFA 23 card, now at an 80. With 94 pace and other rounded stats, the Dutchman could be an invaluable Bundesliga starter player.

Elsewhere, William Saliba is one of many players enjoying a +5 to their ratings in FIFA 23. The Frenchman could be a low-budget beast in the opening week of Ultimate Team thanks to some good stats.

Saliba has a solid combination of 78 pace and 80 defending, with 79 physical also a useful addition. But interestingly, the Arsenal man has 71 dribbling – above what you may typically expect from a centre-back. This may help him feel more responsive in-game.

Despite his healthy stat increase, Saliba does not, unfortunately, make the top five FIFA 23 under-21 player ratings.

Pedri leads the way in this category, rising four ratings to 85 overall. Just behind him is Bundesliga duo Jude Bellingham and Alphonso Davies, who are both rated at 84.

Both Davies and Bellingham may be quite expensive at the game’s launch, as their cards look fantastic. Well known for his speed, the Bayern left-back has 94 pace, with 85 dribbling an added bonus.

Similarly, Bellingham enjoys a very balanced card, plus high-high work rates. This will make him a perfect early-game box-to-box midfielder.

Then, Florian Wirtz and Arsenal’s Bukayo Saka sit joint-fifth, both at an 82 rating. Saka’s well-rounded card may make him a versatile option in FIFA 23. For instance, if you play a narrow formation such as 4-1-2-1-2, Saka could work as an attack-minded centre midfielder, thanks to his 65 defending and solid forward stats.

You can find the rest of the top 23 cards here, on the EA website.