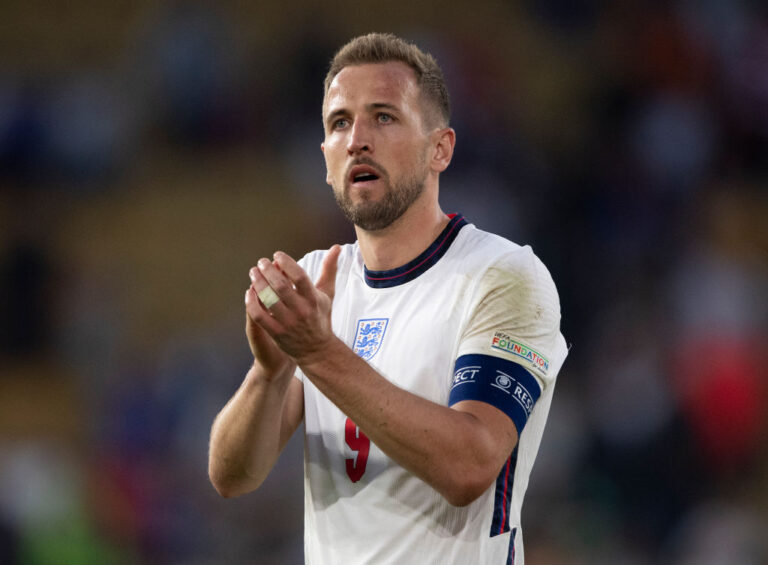 The first images of the kits that England will wear at the 2022 World Cup in Qatar, produced by Nike, have been released.

In partnership with the US sportswear giants since 2013, this will be England’s third World Cup in Nike gear. The 2014 tournament in Brazil saw just three matches for the Three Lions, as England went out at the group stage.

However, Russia 2018 was much more successful. England’s men reached the semi-finals of the World Cup for the first time since 1990. Unfortunately, they lost 2-1 in extra-time to Croatia.

Despite that disappointment, a strong Euro 2020 showing (don’t mention the Final) means the nation is building up expectations again.

Now, fans can see exactly what England will be wearing in Qatar.

Utilising Nike’s 2022 template, the striking shoulder design is the first aspect that stands out on the England home World Cup kit.

An ombre-style pattern sees navy at the neckline blend into increasingly lighter shades of blue along the shoulder. Navy and electric blue trim to the sleeves then compliments this new colourway choice.

As ever, the Three Lions badge sits on the left side of the chest, standing out against the traditional white shirt base. Nike have opted for their simple tick logo, which is on the opposite side of the chest in navy.

In contrast to the shirt, the home shorts are in navy with an electric blue Nike tick. Bright blue trim also mimics the Nike logo colour. Meanwhile, plain white socks finish off the home strip.

Alongside the home shirt, Nike also dropped England’s away kit. Interestingly, the Three Lions return to red on their alternate strip for the first time since the 2018 World Cup. So, maybe there is an element of superstition there.

Unlike the home, the red away shirt comes with a navy-blue collar and thick, navy sleeve cuffs. This provides more of a retro feel, with Classic Football Shirts suggesting that the strip evokes memories of the 1990 World Cup kit.

Bizarrely, Nike have opted to add a blue colour effect to their logo and the England badge on this second kit. Where the three lions usually sit on a white background, the away kit’s crest is electric blue. Whilst standing out more against the red, this also adds a modern twist to the retro-inspired kit.

This same crest adjustment also features on the shorts, which have a red base colour, too.

Ultimately, Nike’s new away offering seems more popular among England fans on social media than the home shirt. Per Footy Headlines, the official presentation and general release of these kits will happen on September 21.

The England kits dropped as part of the American brand’s release of strips for all their teams at the 2022 World Cup.

A host of other European nations also received their new gear from Nike recently. These included France, Portugal, the Netherlands, Poland, and Croatia.

Similarly, Australia, South Korea, Saudi Arabia, Brazil, Canada, USA, and hosts Qatar will all be wearing the US brand in November.