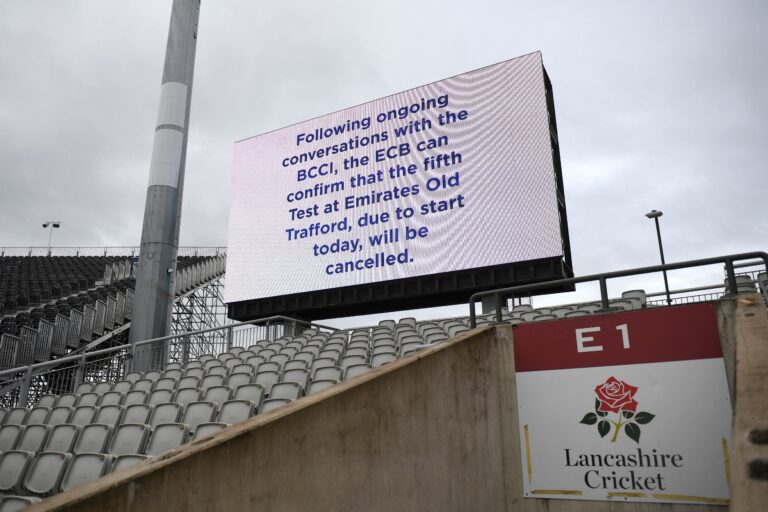 The fifth Test between England and India at Emirates Old Trafford has been “postponed indefinitely” this morning.

The final Test of the series was due to begin today (Friday) at 11am, but was decision was made not to play at around 9am.

Both the England & Wales Cricket Board (ECB) and the Board of Cricket Control in India (BCCI) held discussions over whether the Test could go ahead, after a number of positive Covid-19 cases amongst members of the Indian backroom staff.

The latest confirmed positive test was that of assistant physiotherapist Yogesh Parmar, with the Indian team told to stay in their hotel rooms on Thursday as a result.

The Test was reportedly set to go ahead as of Thursday evening, when all India players recorded negative Covid tests.

But further discussions overnight eventually led to the game’s postponement.

The Indian Express reported that the Indian players had a meeting on Thursday evening, in which the majority of players expressed their unwillingness to play at Old Trafford, given that Parmar had monitored a number of the squad members.

The ECB said in a statement confirming the postponement: “Due to fears of a further increase in the number of COVID cases inside the camp, India are regrettably unable to field a team.

“We send our sincere apologies to fans and partners for this news, which we know will cause immense disappointment and inconvenience to many.

“Further information will be shared in due course.”

The main issue behind the postponement appears to be that of mental fatigue in the Indian camp. The squad have been in the UK since June, when they played the World Test Championship final against New Zealand.

ECB chief executive Tom Harrison told the BBC (via Sky): “You can’t be flippant about issues of mental health, and this is what this is about.

“India have been wonderful tourists, but they have been here a long time. Playing at this level, week after week, is difficult.

“Even if we feel we are emerging from the pandemic, life is different for the players. When Covid creeps into an environment, it can accelerate very quickly.”

Losses of “over seven figures” for Lancashire – chief executive

The postponement of the Test will certainly affect Lancashire – whose home ground is Old Trafford – in at least the short-term.

The county do not currently have a Test scheduled for next year – although both the ECB and BCCI are looking at ways to reschedule the fifth and final Test of this series.

Speaking to Cricinfo, Lancashire chief executive Daniel Gidney said: “These are unprecedented circumstances. We’re in mitigation mode at this point. We will need to work through this with the ECB.

“How big are our losses? We’re talking about significant sums here. We’re talking over seven figures. It’s multimillions of pounds.

“It’s very challenging. We will need to work with the ECB and others to support us through this.

“My primary concern is everyone who has bought a ticket. I don’t think any of us had an inkling the game would be cancelled this morning.

“The final decision was made just before 9am this morning. We’re absolutely devastated for all the disruption caused to ticket holders and hospitality buyers.”