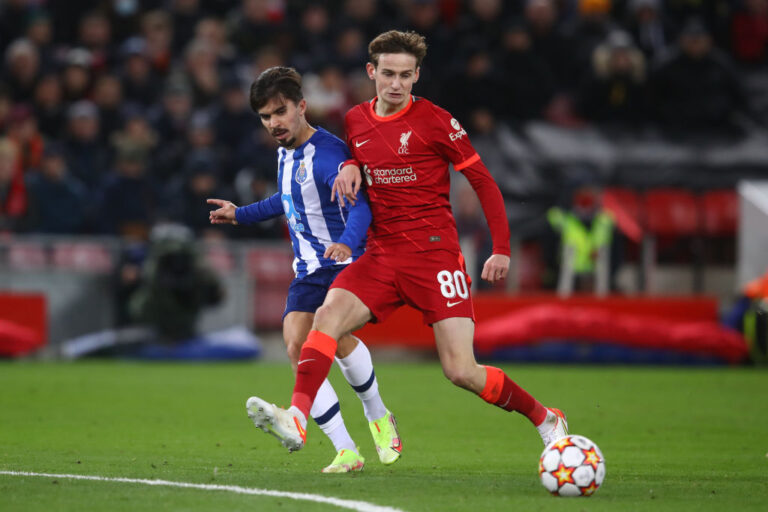 Liverpool have made another strong start to the season thanks to the depth of their squad. Today, we look at youngsters who could shine for the Reds in 2022.

From attacking midfielders to tricky wingers, Liverpool have some outstanding young talents operating in their ranks.

Here’s who we think could make a name for themselves in 2022.

It’s thought that Clark is likely to be fast-tracked through the Liverpool system. The attacking midfielder has scored three goals and provided two assists in eight appearances for reserve teams this season.

He is the son of Newcastle legend Lee Clark. The midfielder has bags of potential and is already tipped for big things at Liverpool.

The midfielder followed up his first-team debut against Norwich City in the League Cup with appearances in the Premier League and Champions League. Not bad.

Only 18-years-old, Tyler Morton has long been a regular for the club’s U23’s and captain for the U19’s in the UEFA Youth League.

Morton stands out for his fearlessness. Additionally, he’s versatile and combative. As a result, we could see him become a key player for Klopp in 2022.

A midfielder who has a tremendous work ethic, Melkamu Frauendorf has gained the confidence of his coaches.

Frauendorf is flexible and adapts well to different situations within a game. In 13 appearances for the U18’s this season, he’s registered four goals and three assists.

It would be a surprise if he was not on Klopp’s radar.

Gordon was signed by Liverpool from Derby County in a £3 million move. He is another who made his first-team debut in the League Cup victory over Norwich.

The right winger has made eleven appearances over different age groups. In that time, he has scored twice and assisted twice.

After James Milner suffered an injury, James Balagizi was a late addition to Liverpool’s matchday squad against Norwich.

He is a tricky midfielder who sticks out for his relentless determination.

Balagizi is strong, and his fluid style of play can make him a real asset to Liverpool in the future.

In twelve appearances for the U18’s and U23’s, Balagizi has scored once and registered two assists. Although an arm injury halted his development slightly, the midfielder is now back terrorising defences.