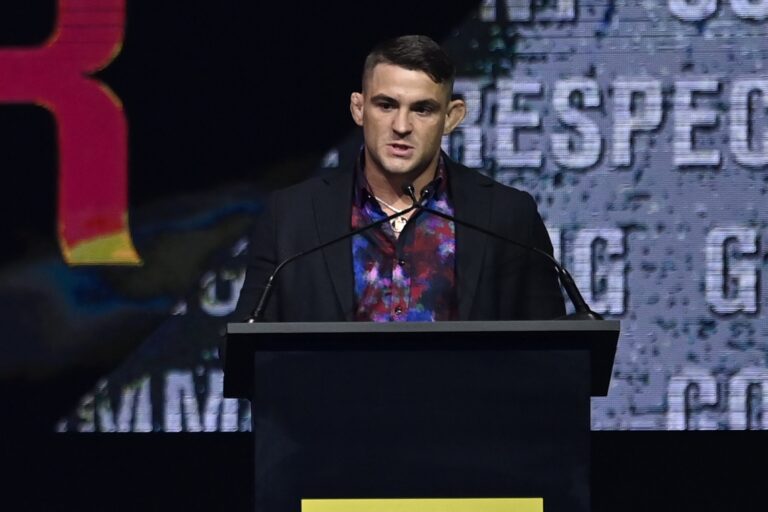 Before 2021 comes to an end, Dustin Poirier will challenge Charles Oliveira at UFC 269 in an attempt to become the UFC lightweight champion.

For years “The Diamond” was on the outside looking in at the 155-pound elite and the same was largely true for his run at featherweight. It was always one step forward and two steps back but in the present day, the 32-year-old is on a path to greatness with a chance to reach the top of the mountain for the first time in his career.

He’s also one of the UFC’s few household names and today, we’re going to try and figure out why that’s the case.

Going to war with Holloway

Poirier was able to get the better of Max Holloway when they met at 145 pounds but when the time came for them to clash for the interim lightweight strap, many questioned whether Max’s volume would prove to be too much for him. Alas, the resolve and power of Dustin was able to shine through on that famous night in Atlanta as he managed to grind out the decision win in a Fight of the Year contender.

The Good Fight Foundation exists because Dustin Poirier and his wife decided to make a real difference in this world and if that doesn’t show Poirier’s true colours, we don’t know what does. Over the years Poirier has auctioned off fight kits on behalf of himself and other fighters, raising thousands of dollars for underserved communities who require healthcare, disaster relief and so much more.

The idea that Dustin Poirier couldn’t win the big one clearly got to him from a mental standpoint on more than one occasion but in 2018, he turned it all around in the most remarkable of ways. In that calendar year he finished both Justin Gaethje and Eddie Alvarez in two bouts that, earlier on in his career, he could’ve easily slipped up in due to his past inconsistencies – but this time, a corner had been turned.

UFC 242 offered up a chance for Dustin Poirier to finally have his crowning moment when challenging the undefeated Khabib Nurmagomedov in Abu Dhabi. Alas, even though he came closer than most to finishing Khabib, it was “The Eagle” who earned the submission win.

What was more impressive, though, was how humble Poirier was in defeat – before going on to beat Dan Hooker in another battle just nine months later.

After suffering the most humiliating loss of his life in 2014, Dustin Poirier wasn’t about to let lightning strike twice when he collided with Conor McGregor at the start of 2021.

In one of the most intense clashes of the year thus far, Poirier utilised his boxing and calf kicks to get McGregor out of there in the second round. Then, just six months later, he beat him again to arrive at the doorstep of history.

Whether or not he can finally walk through it against “Do Bronx” in December remains to be seen.