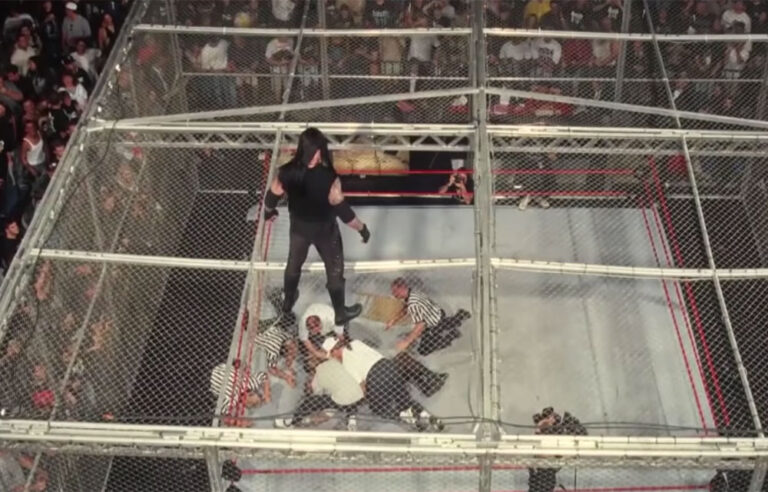 With Hell In A Cell just round the corner, an event and match synonymous with violence and carnage, nostalgia will be heavy on the minds of WWE fans as they remember some of the craziest stunts that have taken place in the promotion’s history.

From Shawn Michaels and Mick Foley flying off (and through) the cell to Shane McMahon showing complete disregard for his own body with his death-defying efforts against the Undertaker and Kevin Owens in recent years, Hell In A Cell tends to bring out the more unhinged side of WWE superstars.

Yet, it isn’t just ‘the Devil’s Playground’ in which jaw-dropping moments are the norm. Over the last couple of decades, WWE talents have been pushing the limits of what the human body can endure.

We picked out five of the craziest stunts in WWE history.

Mick Foley Gets Broken In Half

We had to start with the OG, didn’t we? The match that almost killed the artist formerly known as Mankind/Cactus Jack/Dude Love. And the match which birthed the most iconic line of commentary in sports entertainment history. Jim Ross screaming himself hoarse with the immortal “Good God Almighty! That killed him! As God is my witness, he is broken in half!”

Remarkably, when Mick Foley was sent sailing off the infamous structure and through the Spanish announce table by The Undertaker at King of The Ring ’98, he was able to return under his own steam and restart the match atop the cell. His second crash landing, however, almost took his life. When the cell roof gave way following a chokeslam, the steel chair placed on the mesh panel followed Foley down and cracked his unprotected skull as he thudded against the unforgiving old WWE ring canvas.

Knocked out cold, Foley was attended to by several doctors and somehow finished the match. Although the remaining minutes, thumbtacks and all, were far from pretty. Most chillingly, when Foley asked ‘Taker what he was thinking after the cell-shattering chokeslam, the Phenom’s reply was stone cold; “I thought you were dead”.

Nowadays, seeing Shane McMahon fall from a great height is about as commonplace as seeing Steve Austin down a beer. Yet back at the beginning of the new millennium, Shane O’Mac was still a newcomer to scaling great heights. And promptly falling off them. But a Hardcore Title match against ‘Lethal Weapon’ Steve Blackman was to change all that.

Despite outside interference, Blackman was able to isolate Vince McMahon’s firstborn and pursued him up the entrance aisle. Then the chase led up to the top of the titantron structure, climbing anywhere between, depending on who you believe, 30-75ft in the air. With kendo stick in tow, the challenger laid waste to his billionaire opponent. Until the unthinkable happened, Shane’s grip on the girder disappeared, and off he went, sailing through the Raleigh, North Carolina air as 17,000 in attendance gasped in unison.

Landing (relatively) safely in a dumpster, Shane was followed down by Blackman. The martial arts specialist delivering a mind-bending dangerous leg drop from not far off the spot Shane himself had plummeted, for the 1,2,3.

Now, when it comes to Edge and WrestleMania, we could have just as easily picked his match-winning spear from ‘Mania 22. You know the one. Where he and Mick Foley significantly heated up their 2006 rivalry with the help of a flaming table.

However, we couldn’t put this list together without including one of the most iconic spots in WWE history. One that has been replayed almost as much as Hogan bodyslamming Andre the Giant.

Unless you’ve been living under a rock since 2001, you know the story by now. It’s the historic second TLC match at WrestleMania 17. Jeff Hardy is swinging blissfully in mid air. He believes he’s about to unhook the Tag Team Titles for himself and his brother Matt. Instead, his longtime nemesis Edge has other ideas. Hurtling off a nearby ladder, into the atmosphere and slap bang into Hardy’s midriff with the most chaotic spear you will ever see, Edge takes down the future Brother Nero. Over 20 years later, it’s still dishing out goosebumps. Oh, and Edge DDT’d himself in the process, which is obviously brilliant.

Brock and Big Show Blow Up The Ring

When two super heavyweights scale the top rope, things are not ending well, are they? But when Brock Lesnar and The Big Show did just that during a SmackDown main event in June 2003, the viewing audience could not believe what happened next.

The Mayor of Suplex City may not have been as synonymous with his preferred move of choice during the early stages of his career, but he certainly made this one count. With Show straddling the top turnbuckle, The Beast accompanied him, bringing the pair crashing back to the canvas with an enormous superplex. Only it didn’t end there.

They kept falling – because the ring had imploded around them.

Of course, it’s a stunt that has been replicated several more times in the 19 years that have passed since its first airing, but the imitations can never outshine the original.

Triple H Sends Cactus Jack Through The Cell, The Ring And Into Retirement

OK, so Mick Foley’s (working here as Cactus Jack) retirement after his loss to Triple H at No Way Out 2000 was about as short-lived as Liverpool’s faith in Aston Villa pulling off the unthinkable last Sunday, but on the night where The Hardcore Legend was putting his career on the line inside Hell In A Cell against The Game’s WWE Title, it felt real. Foley left the Hartford Civic Centre to a tearful, rapturous ovation. That he could even leave on his own two feet is nothing short of a miracle.

For 25 minutes, Foley and Triple H had torn at each other with chairs, barbed wire and the cell walls. Then, naturally, they scaled the cage, having broken out of it. Foley first being sent through the announce table and, once again, through the cell roof.

Only this time, after his failed piledriver onto a flaming barbed wire 2×4 went awry, Foley didn’t just demolish the cell roof. He demolished the ring itself. The Cerebral Assassin backdropped him almost 20 feet through steel and then canvas.

The looks on the faces of the Champion and his wife Stephanie said it all. Shock, terror and fear engrossed them. A Pedigree later, and that was that, but it was the penultimate move that sent the fans home in stunned disbelief.