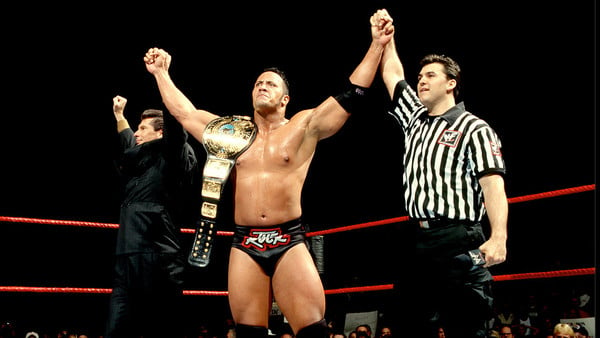 With the likes of Brock Lesnar, Bobby Lashley and Randy Orton being crowned WWE Champion over the past year, it would appear as though experience is more valuable than youth when it comes to being coronated as one of the gems of Vince McMahon’s sports entertainment behemoth. However, this has not always been the case, as the youngest WWE Champions have proven over the years.

The deluge of veterans getting time with the top title (The Miz and AJ Styles have both held it in recent years while north of their 40th birthdays) is not necessarily a newfound trend within WWE, but neither is it the norm. In fact, some extraordinary talents have been bestowed with the honour from a very young age.

So let’s remind ourselves of which five superstars are the top five youngest WWE Champions of all time.

The Viper became the youngest World Champion in WWE history when he captured the now-defunct World Heavyweight Championship at SummerSlam 2004. But he also wrote his name into the record books of the WWE Title’s lineage when he was the Last Man Standing against Triple H during their brutally violent main event title match at No Mercy in 2007. Fifteen years later and the former Legend Killer is still going strong. His fourteenth reign was secured last summer when he defeated Drew McIntyre. We doubt it will be his last, either.

It feels insane to be dropping The Undertaker’s name into a youngest WWE Champions list (no offence, big Mark). Given that The Deadman was running well into his fifties, his debut seems a lifetime ago. But not long after he showed up at Survivor Series 1990, ‘Taker was at the top of the pile. A year later, at Survivor Series 1991, to be precise. In defeating ‘the Immortal’ Hulk Hogan just a few months shy of his 27th birthday, The Phenom became the youngest ever WWE Champion at the time. Another three reigns with the strap would come his way over the next three decades. Not to mention three World Heavyweight Championship reigns and a certain 21-match undefeated WrestleMania streak.

Beating ‘Taker to third spot is a face a few of you will probably be familiar with. The People’s Champion became Corporate Champion when he sided with Vince McMahon and his Corporation at the 1998 Survivor Series. At the expense of Mick ‘Mankind’ Foley, The Rock lifted the big gold eagle, turning heel in the process.

It was to be a turn for the ages. It would lead to several more chaotic bouts against Foley, as the two traded the title back and forth. Before, of course, a feud with a certain Texas Rattlesnake. Now an eight-time champ (10 overall), big Dwayne is rumoured to be heading back to the squared circle for one more WrestleMania main event. This time, against his younger cousin and current Undisputed WWE Universal Champion, Roman Reigns.

Pipping The Rock to the runner-up spot is a relative. the late, great Yokozuna. And by just 11 days. Rodney Anoaʻi was one of the greatest super heavyweights ever to do it. And he proved this with his top tier run in the mid-’90s. After winning the 1993 Royal Rumble, Yoko headed to WrestleMania IX in Las Vegas, where, with the help of manager Mr Fuji, he took down Bret ‘The Hitman’ Hart to lift his first WWE championship.

While Hulk Hogan made sure Yoko’s inaugural reign only lasted a matter of minutes, the tables would be turned a couple of months later at King of The Ring. Yoko regained his title and held onto it until WrestleMania X the following year. Since his untimely passing at the age of just 34 in 2000, he has been inducted into the WWE Hall of Fame. He was inducted by his cousins Rikishi and The Usos.

As is so often the case with anything in WWE, ‘The Beast’ comes out on top here. Twenty years ago, Brock Lesnar changed the game. Debuting after WrestleMania 18, ‘The Next Big Thing’ wasted little time making a name for himself. Within two months, he had become King of The Ring. Within four months, he was WWE Champion. Stunning The Rock at SummerSlam 2002, Lesnar began cementing what would go on to become one of the most dominant legacies in sports-entertainment history.

Two decades on from his debut, the former UFC Heavyweight Champion is still headlining WrestleManias and causing carnage with whoever stands in his way. Long may it continue.

With this group established pretty solidly for the last 15 years, who do you see breaking into the top five youngest WWE champions list next?