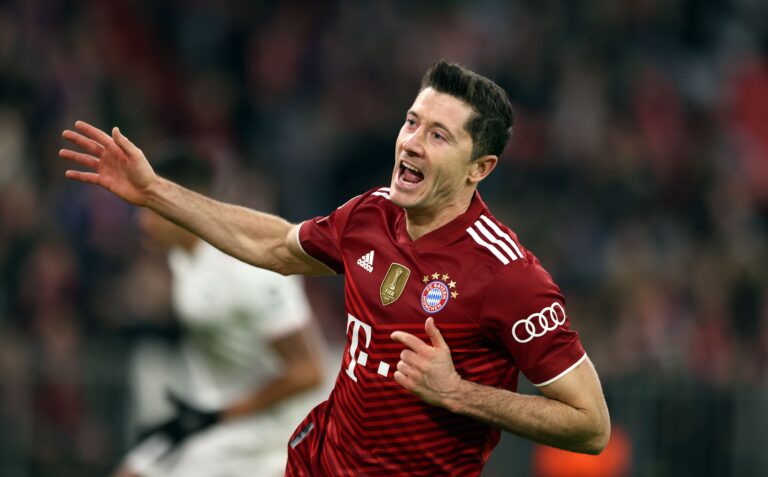 With his hat-trick against Benfica in a 5-2 victory last night, Bayern Munich‘s Robert Lewandowski jumped to the top of this season’s Champions League scoring charts.

It almost comes as a surprise when the Polish striker doesn’t score in a competitive match these days. At the moment, he is arguably the best number nine in the world.

Lewandowski has broken records aplenty over the past year. When he gets the ball in the penalty area, it’s almost a given that he will score.

With the 2021 Ballon d’Or awarding, Lewandowski is amongst the leading contenders to lift it for what would be the first time. Here are five reasons why he should win the trophy:

There’s no better place to start than the competition where he again proved his star credentials on Tuesday.

Against Benfica, he was on top form. All three of his goals came from inside the area.

Two of those were exquisite lobs over the goalkeeper, whilst his opening goal saw him head the ball over the line from close range, again showing his predatory instincts and movement off the ball. A missed penalty was the only blot on his copybook.

His general numbers over the past year in the competition have been nothing short of incredible. This term, he’s already scored eight goals in four games – and he doesn’t look like stopping any time soon.

Last season, he scored in each of Bayern’s victories over Lazio in the last 16. His goal tally could have been even higher if he had not missed the quarter-final against Paris Saint-Germain through injury.

Between February and September this year, he went on a run of scoring for Bayern in every domestic game he was available for. In four of those appearances, he netted hat-tricks.

That incredible run of goalscoring form led Lewandowski to break Gerd Muller’s long-standing record of 40 goals in a Bundesliga season. It was a record that stood for 49 years. But Lewandowski did it, despite missing four consecutive games through injury towards the end of the campaign.

This term, he has kept the goals flowing. He’s plundered a total of 12 in just 10 Bundesliga games, whilst he also scored twice in Bayern’s Super Cup victory over Borussia Dortmund in August.

Poland haven’t had a great record in international tournaments in recent times. They did not make it out of the group at either the 2018 World Cup or Euro 2020.

Lewandowski, however, has still managed to bang in the goals consistently. He scored three of Poland’s four goals at Euro 2020, including a dramatic equaliser in the 1-1 draw against Spain.

This calendar year, the 33-year-old has nine international goals, with the other six coming in World Cup qualifying. Wherever Lewandowski plays, and for whichever team, the goal numbers keep on rising and rising.

When you think of players getting better and better comfortably into their 30s, the list isn’t a long one. That list would be dominated by Lionel Messi and Cristiano Ronaldo – in other words, the very best world footballers.

Lewandowski is undoubtedly on that list. At 33, he shows no signs of slowing down. Instead, the forward is speeding up. The 41 goals he scored in the Bundesliga last season was his highest career tally.

In addition, no player in the top five leagues has scored more than Lewandowski in all competitions in this calendar year. They are astonishing statistics.

If Lewandowski does go on to win the Ballon d’Or, it would perhaps make up for last year. He was again amongst the leading candidates to snap up the award, but it was cancelled due to the Covid-19 pandemic. He did, however, scoop up The Best FIFA Men’s Player award.

Whilst, of course, the two years have been completely different in footballing terms, Lewandowski is arguably in an even stronger position to win the Ballon d’Or this time around.

If he does, it would certainly be a well-deserved accolade.