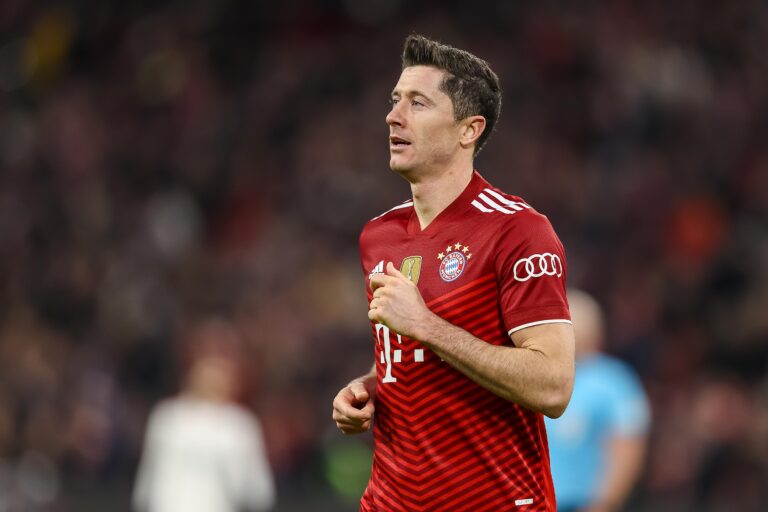 With the Ballon d’Or ceremony set to take place on November 29, talk has been increasing over time about who deserves to win the trophy.

Thirty players were nominated. Italy and Chelsea‘s Jorginho is set to be a leading contender, as is Paris Saint-Germain and Argentina’s Lionel Messi.

But there’s one name who should equally be in the discussion – Robert Lewandowski. There’s a host of reasons why the Bayern Munich striker should be in serious contention. His form at domestic, European and international levels has been incredible over the last 12 months.

He was also spoken of as a leading contender for the award last season. However, the ceremony was cancelled due to the Covid-19 pandemic. But why has Lewandowski, who has hit 30 or more Bundesliga goals in five of his last seven seasons, not won the Ballon d’Or before?

Let’s examine the possible reasons, starting from when he joined Bayern in 2014:

Between 2008 and 2017, Messi and Ronaldo won every single iteration of the Ballon d’Or.

Their performances at the top of world football for so many years have been legendary.

In 2014, Ronaldo – then at Real Madrid – won four trophies. He scored the winning goal in the 2014 Champions League final. He won the Ballon d’Or by 20% of the vote ahead of Messi.

A year later, Messi was back on top. He netted 43 league goals in the 2014/15 season and won the Champions League for the fourth and most recent time in his career.

In 2016 and 2017, it was Ronaldo’s turn again. Two more Champions League titles, winning Euro 2016 and scoring 40 league goals in consecutive calendar years saw to that.

During that time, Lewandowski was building a legacy of his own at Bayern. He quickly settled in at the club, netting 17 goals in his debut season. Lewandowski then hit 30 league goals in each of the following two campaigns.

He smashed in 16 goals in just ten appearances for Poland during qualifying for the 2018 World Cup on the international stage. But he wasn’t quite comparable to Messi and Ronaldo – yet.

For the first time since Kaka received the award in 2007, the Ballon d’Or had a winner other than Messi and Ronaldo in 2018.

After guiding Croatia to the World Cup final – and Real Madrid to yet another Champions League triumph – Luka Modric’s name was engraved in the prize.

Lewandowski, surprisingly, didn’t make the 30-man shortlist for the 2018 edition. The striker had a difficult World Cup, failing to score in any of his three appearances. Poland went out in the group stages.

At club level, though, his numbers were still incredible. He scored 29 Bundesliga goals during the 2017/18 season. But something, obviously, still had to give.

All the talk ahead of the 2019 ceremony was whether Liverpool‘s Virgil van Dijk could beat Messi to the Ballon d’Or. He couldn’t, missing out by only seven points.

For Lewandowski, 2019 saw him named as one of the 30 nominees. He ranked in the eighth position, ahead of the likes of Eden Hazard, Kevin De Bruyne and Champions League winner Roberto Firmino.

Bayern, however, were knocked out in the last 16 of Europe’s premier competition by eventual winners Liverpool.

In 2018/19, Lewandowski scored 22 goals in 33 Bundesliga games – his lowest return since his debut season at Bayern.

He started the 2019/20 season superbly, netting 13 times in the league by November. It kickstarted one of his most successful seasons and put the Polish striker in position for his first Ballon d’Or.

The year 2020 represented some of Lewandowski’s most outstanding achievements on a football pitch.

He scored over 50 goals for Bayern in the season prior, 15 of which came in the Champions League.

Bayern went on to win the Champions League for the sixth time, beating Paris Saint-Germain 1-0 in Portugal.

Ronaldo and Messi endured difficult seasons as far as silverware was concerned. Ronaldo won only the Serie A title with Juventus; Messi won no trophies with Barcelona.

All indications pointed to the fact that Lewandowski would be one of the serious contenders to lift the Ballon d’Or trophy. But it was then announced the award wasn’t taking place due to the impact of the Covid-19 pandemic.

When asked who the winner of the 2020 Ballon d’Or should have been, Lewandowski said (via ESPN): “Me.”

“We won everything we could with Bayern. I was the top scorer in all competitions I featured in, and I think a player who achieves this would win the Ballon d’Or.”

Will 2021 finally be the year of Lewandowski winning the Ballon d’Or?