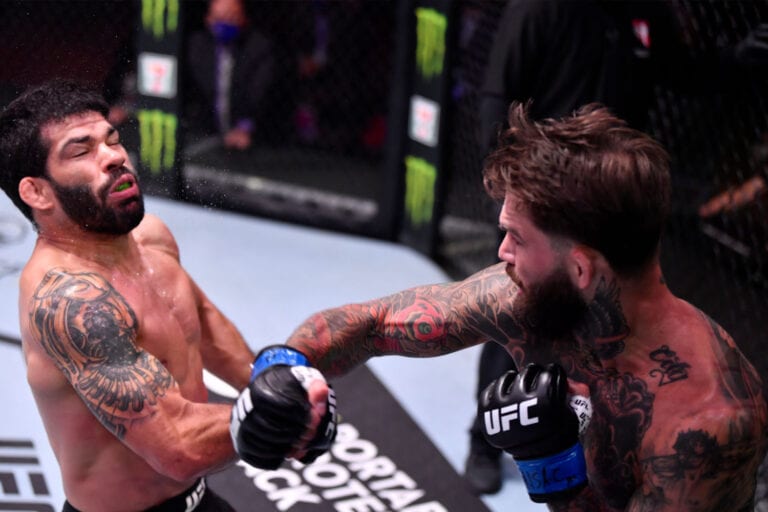 Ahead of his return this weekend, it gives us an excuse to revisit Cody Garbrandt’s outstanding knockout win from UFC 250.

On that night last June, ‘No Love’ made his first octagon appearance in 15 months and managed to knock out Raphael Assuncao with one second left in the second round. Garbrandt waited, dipped down and landed one of the cleanest KOs you’re ever likely to see.

It came as Garbrandt was attempting to put an end to a three-fight losing skid that saw him suffer consecutive TKO defeats at the hands of TJ Dillashaw and Pedro Munhoz.

Garbrandt quickly put all of that behind him though, producing this absolute piece of art from the UFC APEX.

The pressure on the shoulders of Garbrandt was pretty significant but instead of losing his cool, he was able to showcase the kind of composure that helped him defeat Dominick Cruz at UFC 207 in December 2016 to win the UFC bantamweight title.

This Saturday night, he’ll attempt to take another huge step towards reclaiming his belt when he locks horns with the unpredictable Rob Font.

The undeniable potential within Garbrandt’s game is pretty hard to ignore but in equal measure, his chin has fallen victim to some lethal shots in the past.

If he can stay focused, keep calm and stick to a solid enough game plan, there’s no reason why he can’t win – but bantamweight isn’t quite as simple as that.

From the champion through to the top 15 and beyond, this division is being just as stacked as lightweight. There are veterans, former champs, current contenders and future stars all battling their way to the top.

Garbrandt and Font will hope to keep themselves in the mix at UFC Vegas 27 on Saturday, live on BT Sport.

Kevin Holland responds to criticism over his ‘talking’ in UFC loss

Five reasons why Francis Ngannou is the favourite at UFC 260

Jorge Masvidal is launching his own bare-knuckle MMA promotion

Kevin Holland responds to criticism over his ‘talking’ in UFC loss

Five reasons why Francis Ngannou is the favourite at UFC 260

Jorge Masvidal is launching his own bare-knuckle MMA promotion