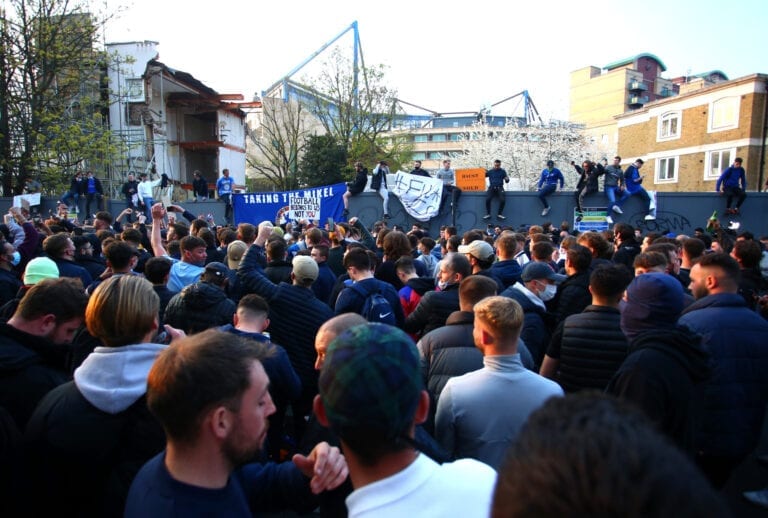 Florentino Perez has made the bizarre claim that the Chelsea fans who attended a protest against the Super League were placed outside Stamford Bridge.

Chelsea were one of the six teams, and before their clash with Brighton on Tuesday, fans gathered outside the ground to protest against the side’s involvement in the competition.

Chelsea technical director Petr Cech was forced to address the fans present, telling them to “give everybody time“.

By the end of the evening, the Blues had withdrawn from the Super League, alongside the other five English clubs.

Manchester City were the first team to officially announce their intention to withdraw from the Super League.

That meant that the project, with Perez named as its inaugural chairman, was set to collapse almost as quickly as it had been announced.

The Real Madrid president spoke to the media on Wednesday, and took aim at several of the English clubs involved.

One of his more notable comments came on Chelsea, with the 74-year-old not only claiming that only 40 fans were outside Stamford Bridge – there were clearly far more – but that he knew who “took them there”.

He told El Larguero in Spain: “Chelsea fans? They were 40 people outside Stamford Bridge… and if you want, I will tell you who took them there.

“Who took Chelsea fans to Stamford Bridge are the same people who put those anti-Super League shirts on Cadiz [against Real Madrid] tonight.”

In an explosive interview, Perez also launched an attack on an unnamed English club involved in the Super League – although did refer to a Manchester club.

He believes that the club played an important role in the ultimate collapse of the competition and said they were “never convinced” in the project.

He explained: “There was someone among the six English teams who did not have much interest in the Super League and that began to infect others.

“It is a team that was never convinced.

“The owners of Manchester began to make a manipulated campaign that we were going to finish with the leagues and that the merits were not rewarded.”

He also claimed that the 12 clubs were involved in a binding contract, and that the Super League is “not dead”.