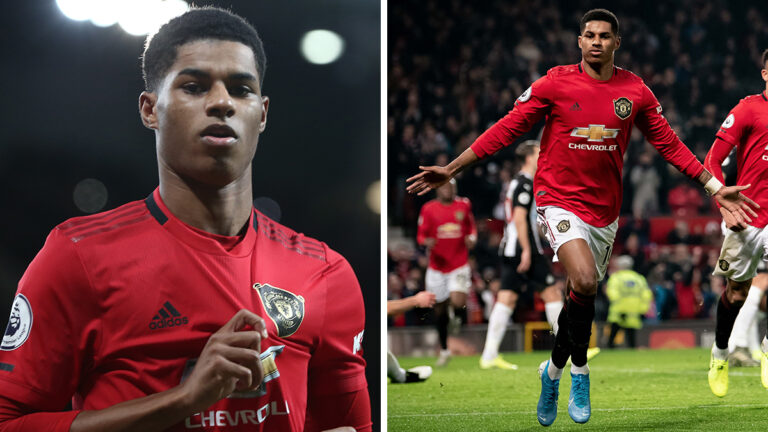 In what has been a torrid few years for the red side of Manchester, the rare moments of joy have often been provided by one man in particular.

It’s very easy to take Marcus Rashford for granted – but at just 22 years old, the academy graduate is beginning to rack up numbers that put him in the company of the game’s elite.

Since the moment he announced himself with two goals against Midtylland in 2016, followed up by another two against old rivals Arsenal on his Premier League-debut just three days later, it was clear something special was emerging.

By no means has it been plain-sailing for the young man, experiments with his position have no doubt hindered his goal-scoring return in previous campaigns. Now having firmly cemented himself on that left-hand side, Old Trafford finally has a player once again capable of lifting fans from their seats. Something that has been much-needed in an extremely tough period for the club.

The frustratingly erratic moments are vanishing and there’s an extra quality about the attacker’s all-round game that proves deadly when combined with that raw talent that has always been present.

Having notched 14 Premier League goals and four assists at the time of writing, there was a very real chance of Rashford bagging the Golden Boot before his injury – something which came about due to the club’s dire recruitment strategy.

These consistently strong performances are all-the-more impressive considering the distinct lack of quality around him. Time and time again we’ve seen Rashford shoulder responsibility and drag his team through games single-handedly.

With the least creative United midfield in recent memory and Pogba’s extended absence, United’s front line have been forced to live off scraps. Put Rashford in a team creating the volume of chances that the likes of Liverpool and City do and his numbers almost certainly skyrocket.

The club’s struggles have been well-documented, but that shouldn’t take away from consistent individual brilliance. If United were challenging this year, the conversation surrounding the striker would be so much more.

With a big summer on the international front ahead, there’s no doubting that a deserved spot in the starting 11 awaits, depending on fitness. If Rashford can replicate his impact at club level for the national side, the Three Lions could be in for another extended run in a major tournament.