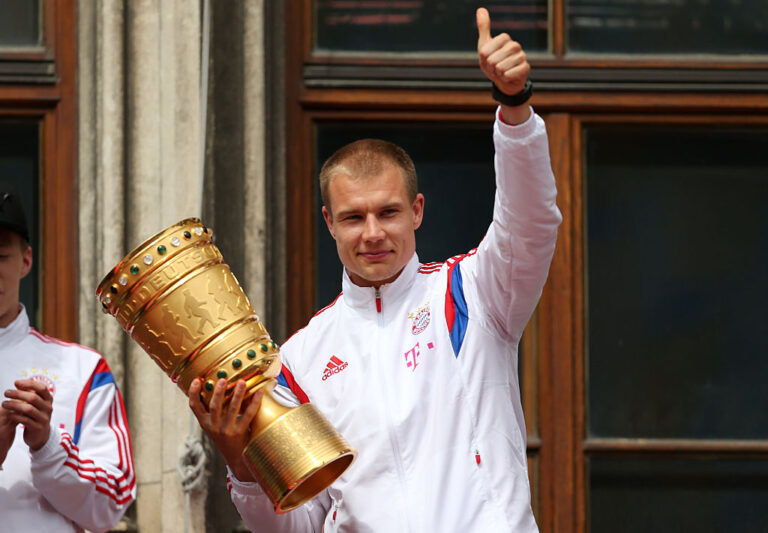 Former Bayern Munich and Germany defender Holger Badstuber has announced his retirement from professional football at 33.

A player who started his career with an abundance of potential, Badstuber made over 350 professional appearances for Bayern, Stuttgart, Schalke, and Swiss side FC Luzern.

Starting in the academy of the Bavarian giants, the German made his first-team debut in 2009. He quickly established himself as a regular in the Bayern defence, making 33 appearances as they won the 2009/10 Bundesliga title. Five more league titles followed in his time at Munich.

Badstuber was also a part of Bayern’s treble-winning 2012/13 side, giving him a Champions League medal. Unfortunately, from this point, injuries continued to mount up.

After continually struggling for fitness, Badstuber joined Schalke on a three-month loan in 2017. The defender managed to get some game time during the loan, featuring 12 times.

However, this did not stop Bayern from allowing him to join Stuttgart in the summer of 2017. Here, injury issues continued to plague Badstuber endlessly. After 61 appearances in four years, Stuttgart let him go to Swiss side FC Luzern, where he stayed for five months.

Clearly a talented defender, injuries truly robbed fans of seeing Holger Badstuber at his peak before his retirement.

During his career, Badstuber suffered some unbelievably bad injuries. For instance, in December 2012, the then-Bayern defender tore his cruciate knee ligaments. Six months later, after nearly recovering from that, he tore the exact same ligaments. Badstuber therefore missed over a year from this double injury.

Then, just a few matches into the 2014/15 season, the German tore a tendon in his left thigh. He missed 21 matches as a result.

The bad luck and thigh problems continued at the end of this season, too. In April 2015, Badstuber tore his thigh again, but this time required surgery to fix it.

How much misfortune can one man get? It turns out a lot. An ankle injury sidelined the defender in 2016, after which Badstuber managed to stay fit on loan at Schalke.

At Stuttgart, though, the fitness woes returned. Calf and adductor problems, as well as illness, kept Badstuber from the pitch. Overall, Badstuber missed 212 matches due to injury throughout his career, per Transfermarkt.

And following a spell with Luzern, Holger Badstuber recently announced his retirement from football.

In a statement on his Twitter, the former Germany international confirmed that he was hanging up his boots.

“Dear fans… after 13 years of professional football, I am announcing the end of my career as an active player.

“Of course, I would have wished for a few less serious injuries. But the joy of what I have achieved is very great. I am thankful for everything.

“However, I will miss the camaraderie that I was able to experience in my teams. Just like being close to the fans, which was always important to me. I would like to thank you very much for your support over the years!”

Holger Badstuber then gave fans an insight into his post-retirement plans. He confirmed that he plans to stay connected to football.

“I will stay true to football, my passion,” continued Badstuber. “I follow in my father’s footsteps and start a coaching course. Hopefully, I will stay in football for a long time, albeit in a different role.

“Many thanks to all my teammates and to you, fans. Your Holger.”