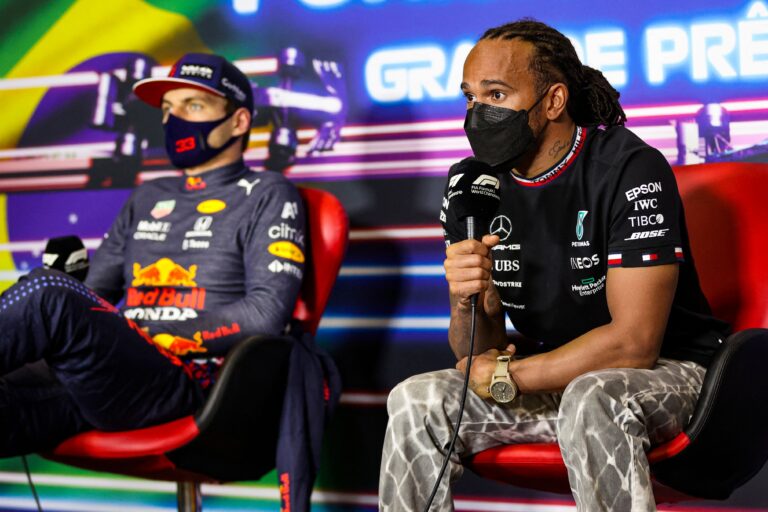 With just three races remaining, the 2021 Formula 1 championship is now into its final straight.

This weekend, Max Verstappen holds the lead in the Drivers’ Championship going into the Qatar Grand Prix. The Red Bull driver has 332.5 points. Mercedes’ Lewis Hamilton, meanwhile, is in second place with 318.5 points. Both drivers still have a chance of claiming the coveted prize.

Hamilton won the Brazilian Grand Prix last weekend to reduce the gap to Verstappen. Starting the sprint race section from last on the grid after being disqualified from qualifying, he came back through the field from 20th to fifth. He was then relegated down to 10th on the starting grid after an engine penalty.

Hamilton then charged through the field again during the 71-lap race before overtaking Verstappen on lap 59 and sealing a thrilling victory.

In the Constructors’ Championship, meanwhile, 11 points now separate Mercedes and Red Bull. It’s gearing up to be an exciting final three races – but who will come out on top?

Let’s look at a few of the hundreds of permutations for the two contenders, both for the drivers’ and constructors’ standings:

In the lead with three races to go, Max Verstappen is in pole position to claim his first Formula 1 world championship.

The 24-year-old has never been in this position in the sport at such a late stage in the season. In fact, he has not led a series since graduating from karting back in 2013.

What Verstappen hasn’t got in experience, though, he has made up for in pure speed. He has won two of the last three races, although he finished second behind Hamilton in the previous race in Brazil.

Verstappen knows that he is guaranteed to win the championship if he wins two of the three Grands Prix.

That is because, at that point, Hamilton could only tie at best. If both drivers finish the season on level points, it will go down to races won. Verstappen has nine victories so far, whilst Hamilton has six. Nine wins for Hamilton in a different scenario would win him the title outright anyway, whilst any other outcome, alongside a tie, would mean Verstappen is champion.

The situation for Hamilton is slightly more complicated. However, if he wins all three of the remaining races, he will win a record-setting eighth Formula 1 world championship.

Two wins and a second-place – excluding the additional point for fastest lap -meanwhile, would give Hamilton 386.5 points. For Verstappen to win the title, he would need to score 54 points from the final three races. The Dutchman could do it with two second places and a third but would need to record the fastest lap in each race for the extra point.

Hamilton needs to outscore his rival by 15 points to win an eighth world crown.

Whilst Hamilton is not currently in the advantageous position in the drivers’ standings, his team, Mercedes, holds the lead over Red Bull in the constructors’ standings.

That means that if Verstappen does go on to win the world title, there is no guarantee that his team will win the constructors’ championship – and the same in the case of Hamilton and Mercedes.

The Silver Arrows have the lead as it stands. A total of 132 points can be obtained by a team’s drivers finishing first and second in each of the last three races, with one recording the fastest lap. Mercedes need to avoid a deficit to Red Bull of 11 points or less in those races to win the constructors’ title.