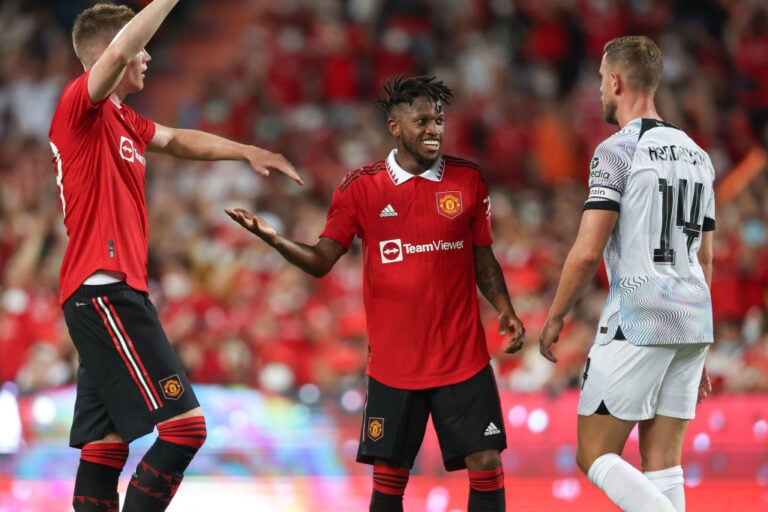 Erik ten Hag’s tenure at Manchester United has got off to a good start, with a Fred goal the pick of the bunch in a 4-0 rout of Liverpool.

Red Devils fans can breathe a sigh of relief that there seems to be progress under the new boss. Additionally, they got to enjoy some goals against their bitter rivals for the first time in a while.

Meanwhile, Liverpool’s supporters in Bangkok likely felt underwhelmed at their side’s display. The Reds played like they very much considered the game a training session.

The Old Trafford side dominated as the crowd at the Rajamangala Stadium was treated to a collection of classy strikes.

A slice of fortune for United, but nothing less than they deserved.

Around the half-hour mark, Man United’s Brazilian midfielder scored the standout strike from today’s game. Like the first goal, another poor Liverpool clearance fell to a United player on the edge of the box.

This time the ball came to Fred, who scored a delightful, chipped goal that arched over the helpless Alisson to double the Red Devils’ advantage.

As a result of the lacklustre start, and the unlimited substitutions available, Jurgen Klopp made 10 changes. However, the new team conceded almost immediately after coming on.

Anthony Martial proved just how potent Erik ten Hag’s high-pressing mentality can be. The Frenchman intercepted a Rhys Williams pass and sprinted toward the Liverpool box. Martial then kept his composure as he lifted the ball over the onrushing Alisson into the net. United were 3-0 up after just 33 minutes.

In the second half, both managers made changes to give their players a break from the humid conditions. And it was a substitute that got Man United their fourth of the game.

The architect of the goal was Eric Bailly. He went on a brilliant run from the edge of his penalty area before feeding Facundo Pellistri.

In this devastating counterattack, Pellistri played the ball wide to Amad Diallo, who carried the ball into the box. The youngster then cut the ball back to Pellistri, who slotted home.

Ten Hag will certainly be happy with the speed and intensity in which his side turned defence into attack here.

Brimming with confidence, United’s next pre-season fixture is in three days’ time. On July 15, they will play Melbourne Victory at the historic MCG.

See the highlights in full below.