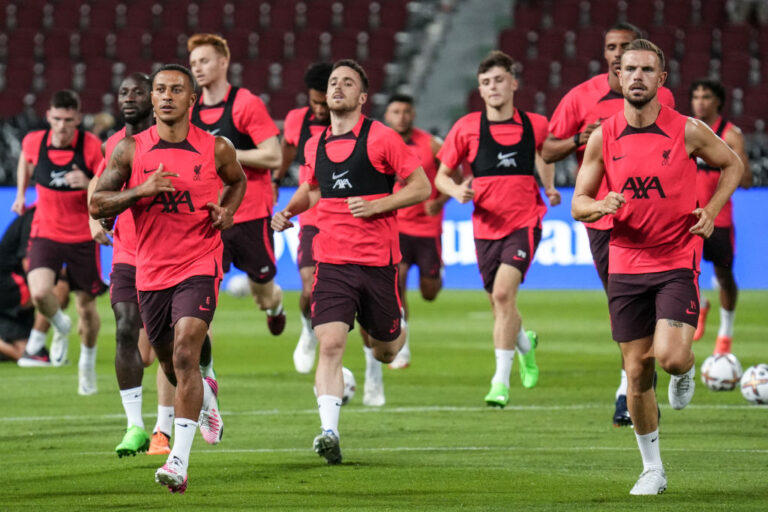 Liverpool will leave fans and opponents fixated on their new 22/23 away kit as it features a hypnotic marble-pattern design.

The Reds will not be delaying the new shirt’s debut either. They will play in the vibrant number in their pre-season fixture against Manchester United, which takes place in Thailand. It is a perfect opportunity to show off the fresh design in front of an alternative market as a result.

The 22/23 campaign marks the third season of the Liverpool and Nike partnership – and the American manufacturer is not afraid to try different things when it comes to the away kit.

As mentioned earlier, the stand-out feature of this new strip is the striking marble design that dominates the shirt. It uses optical illusion-style lines in a variety of colours, working in contrast to the white base colour.

White is a traditional staple of Liverpool alternative shirts. Back in their inception, in 1892, the Anfield side had white shirts for their change strip.

Additionally, the dark black trim on the sleeves and back of the collar compliment the wild and wavy design. Nike also utilised black for the club crest, Nike logo, and the Standard Chartered sponsor emblazoned across the torso.

However, the shorts of the 22/23 kit are in plain white, with black trim on the side. This is similar to the back of the shirt. A large white panel is present there, so players’ names and numbers show up clearly.

The kit maker says that the multi-coloured pattern is a tribute to the 1990s dance music scene. Liverpool’s nightclubs were prominent in the movement, and music is part of the city’s fabric. Some long-standing Reds fans may appreciate the nod to the city’s culture.

Liverpool’s release video also made reference to this, featuring dance music from Yousef and nightclub-inspired lighting.

The Merseyside club have released their new 22/23 away kit with online-only early access. This is available via the club website, with first orders going out to fans on July 18. Alternatively, supporters can wait until the general sale date, which is August 19.

But what do the Liverpool faithful think of it?

Throughout their short time as supplier, Nike’s kits have proved pretty popular on the whole. Last season’s ivory and green number was a real hit. However, the yellow third shirt was not as well received.

This season’s offering, though, has not received as much positive commentary thus far. Although some do love it, calling the new gear ‘beautiful’, many Reds fans were unimpressed.

On Twitter, a fan did not appreciate the busy visual aspect of Nike’s design.

“This actually hurts to look at,” responded one fan to Liverpool’s release video.

In a similarly damning critique, another follower asked for a change of supplier. “Bring back New Balance,” they tweeted bluntly.

Despite the mixed reaction online, the passionate supporters of Liverpool will still likely make this new shirt absolutely fly off the shelves. Who knows? Maybe they will like it more once they see the kit on the pitch.