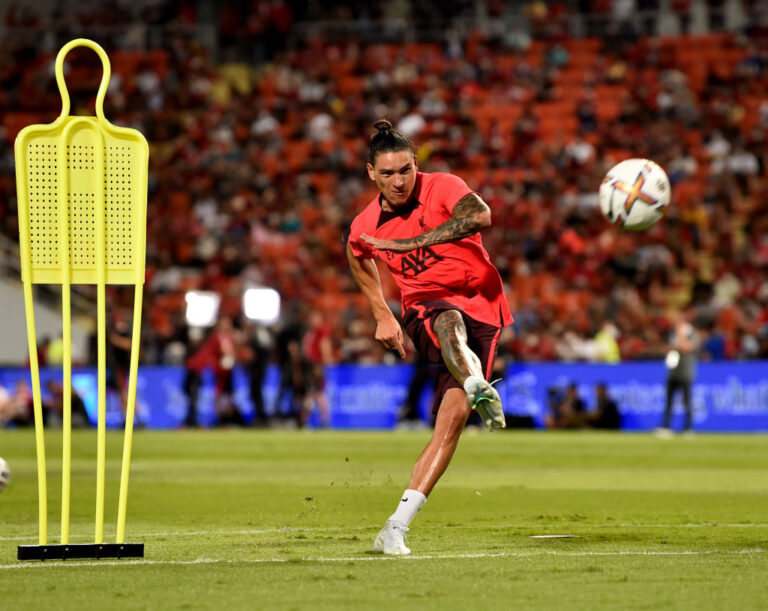 There will be a classic Premier League rivalry rekindled in Thailand today. Here is everything you need to know, including the channel, start time, and venue, ahead of Man United vs Liverpool.

Although the actual result of a pre-season fixture can often be taken with a pinch of salt, any opportunity to beat a fierce competitor is a tasty fixture. For Man United, this will be the first step towards avenging the 9-0 aggregate Premier League deficit they suffered against Liverpool last season.

Erik ten Hag also has his first match in the United dugout today. Supporters will be interested in what side he may put out for this fixture. Additionally, Red Devils fans could get their first look at new signing Tyrell Malacia.

On the subject of new signings, Liverpool boast two fresh squad members for their pre-season tour. If Jurgen Klopp fancies it, we could see debuts for Darwin Nunez and Fabio Carvalho.

As ever, pre-season will often see plenty of substitutions. Therefore, even if the new guys do not start, they will likely feature off the bench.

What time does the game kick off?

Due to the time zone difference, Liverpool and United play each other at quite an awkward time for those who are working.

The kick-off is at 2pm BST on July 12, meaning that some may have to wait until later to catch up on the game.

What channel can I watch Man United vs Liverpool on?

Unfortunately, Man United vs Liverpool is not on a regular domestic TV channel. Instead, the clubs have control of the coverage.

For Red Devils supporters, MUTV is the place to catch all the action. This is available on Sky channel 418 and Virgin Media channel 526. However, it does require a separate subscription.

A game pass means you can also log in to watch the pre-season games on the Man United app or on ManUtd.com, too.

Similarly, Liverpool are utilising their club channels to show their pre-season fixtures. LFCTV GO is the service available, which also requires a monthly sign-up.

But, the Reds are offering 30% off an annual subscription if you use the code PRESEASON22. So, that’s worth remembering.

LFCTV GO currently costs £49.99 for an annual pass (without the aforementioned discount) or £4.99 a month. Like MUTV, this means you can also watch the game via the Liverpool FC app on any device of your choosing.

Where is the game taking place?

In what has become a staple of pre-season, the two Premier League giants have jetted off far away to cater to fans across the globe. This year, Liverpool and Man United do battle in Thailand.

It should be a sold-out stadium to greet the Premier League sides, with organisers announcing that most tickets were snapped up within hours of release. Despite this, ticket sellers have caused some controversy.

What made fans even more annoyed was the fact that some match tickets were on sale at half price yesterday, meaning thousands massively overpaid too.