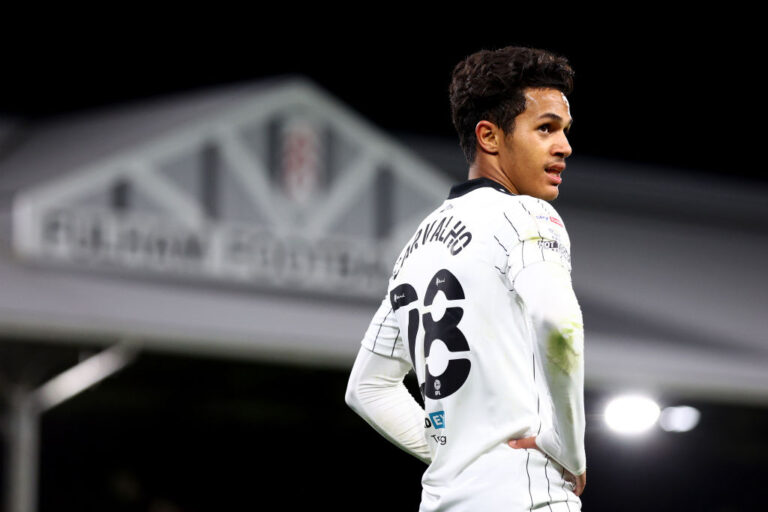 We spoke to Humphrey Aghoghovbia Jr, the scout who discovered Fabio Carvalho, about the youngster’s impending move to Liverpool.

UPDATE: This piece was originally published in early May 2022. Liverpool subsequently confirmed Fabio Carvalho’s move to the club on May 23rd. Enjoy the piece.

Branded a disgrace by certain sections of the media for their alleged first-leg cowardice at Anfield, Villarreal had it all to do in the Champions League semi-final second leg against Liverpool at El Madrigal.

Few gave them hope, yet they managed to overturn the two-goal aggregate deficit by the break, walking down the tunnel level.

The way in which Villarreal dominated the first half suggested there was no reason they couldn’t complete the job in the second. No reason apart from the Liverpool bench. A glance at that reminded fans of why Liverpool played in every match they could have possibly played this season.

They have not won every game, but they’ve won almost every game that mattered. A club looking to challenge on all fronts needs a squad to match that ambitious goal, and Liverpool have that.

Jurgen Klopp summoned Luis Diaz from the bench. A Colombian attacker who arrived a few months earlier in a £37.5m transfer from Porto, Diaz has settled in extraordinarily quickly. Beyond the stats – six goals and three assists in 22 appearances – Diaz has the same energy and drive as his teammates. His impact in the second half was instantaneous and swung the tie in the visitors’ favour.

He is a ‘Liverpool player’ in every sense. We’re talking in the ‘This means more’ hyperbolic way now. Diaz gets it. He gives his all for the shirt, and that’s the type of player clubs want to hand their shirt to. One who won’t simply kiss the badge or hold the shirt up for publicity shots. They’ll wear it with pride; they’ll embody it.

Liverpool’s hit record in this department is unrivalled. Rummage through their apple basket, and you won’t find a bad one. All green and healthy, like they’ve been given a sly polish before the examination. Their recruitment strategy is the envy of clubs around the world. Now, when Liverpool sign a player, the expectation is that he will fit in seamlessly. Like Salah, Van Dijk and Alisson before him. Wijnaldum, Matip and Fabinho; Thiago, Konate and Jota; it’s a long list.

The next name to add to that list could be Fabio Carvalho.

Fabio Carvalho, then 18, received his first taste of first-team football last season. The Fulham youngster was allowed to impress from the off against Southampton. Another defeat befell the doomed side, but Carvalho provided a silver lining. His thunderous goal off the underside of the crossbar was consolation beyond the 3-1 loss.

Fans knew this was a sign of things to come. However, they probably didn’t anticipate the season Carvalho would have in the second tier. A key member of Fulham’s title-winning squad (their first league title in 21 years), Carvalho scored ten goals and created a further eight, attracting a queue of Champions League suitors.

In April, Fabrizio Romano reported that Carvalho’s move to Liverpool was a ‘done deal.’ The savvy Reds got him at a bargain price despite competition from Paris Saint-Germain. At the time, there wasn’t a plan to loan him back. Of course, all this talk may be premature until both clubs confirm the deal. Carvalho played down transfer talk recently, only for Fulham chief Tony Khan to contradict him.

If the destination is uncertain, the trajectory is not. Carvalho is destined for the top. Mind you, Humphrey Aghoghovbia Jr has been saying that for years.

The scout who discovered Fabio Carvalho

When Romano told his Twitter followers the news, it caused a stir, not least in Humphrey’s WhatsApp group chats. His phone was buzzing non-stop with messages containing screenshots of the tweet. This news was big for Fulham, Liverpool, Fabio, and Humphrey, the scout who alerted the Cottagers to the youngster.

SPORF caught up with Humphrey after he had finished a mentoring session with an under-16s team. What Humphrey does is beyond the remit of an ordinary scout. He leads Lionheart Football, a player development company that offers guidance and coaching to youngsters in various ways. The company’s unique selling point is that they offer a service which they claim revolutionises scouting.

Their Player ID platform eases the scouting process for both players and scouts. Footballers can sign up for a live scout report or an online one from the video footage that they submit. A scout will then look at strengths, areas for improvement and more before providing a suggested action plan. It simplifies the operation.

“So rather than spending four hours on a Sunday going towards the game and travelling back,” Humphrey begins, “now you can see just from the week – you might be off of work, it might be during the weekend – you can still have a platform where there are loads of young players. Think Football Manager for grassroots football.”

Beyond this, Lionheart has an academy and offers one-to-one training sessions. The range of services they provide is comprehensive. Humphrey has been in the business for a while; knowing from an early age that he wanted to work in football, he used a talent for spotting prodigies to forge an industry path.

When Humphrey was in his teens, he became obsessed with wonderkids like Freddy Adu, the famous youngster who broke through at DC United at 14. (This meteoric rise led many to suggest Adu was older than he was despite no evidence to back this up.) Although he accepted that playing wasn’t the best route for him, Humphrey was keen to work in football. “I was researching coaches, agents, scouts; just the way the whole football landscape worked.”

With his eye for talent in mind, he settled on scouting. After writing to all the London clubs in the Football League, Humphrey got gigs with Brentford and Charlton. From there, he’s gone from strength to strength. He’s seen youngsters he found in local leagues receive pro contracts, but none more successful than Carvalho.

Humphrey thinks back: “Scouting is so unconventional, and the best scouts do their work in an unorthodox manner. Of course, there’s the traditional route of going and contacting clubs and informing them of your attendance at a weekend game. But then, I think there’s your network as well. So having contacts, networking and speaking to people, being integrated and immersed in different communities. And so, Carvalho came about because my friend Carlos was working in his local community…”

Like everyone else around him, Carlos could see Carvalho’s talent. He was playing street football on concrete pitches; all he needed was the right setting. Carlos alerted Humphrey to this ‘absolute baller.’ The Carvalho family had moved to England from Portugal not long beforehand and were still settling in. Fabio had already found a local team, Balham, to play for, but didn’t know his own potential.

After arranging to see Carvalho play at a weekend session that he organised, Humphrey was blown away. It was an informal setting where people of all ages were playing – adults, teenagers and kids.

“Fabio must have been 11 or 12. And honestly, before we even started playing, Fabio was just doing one-twos and crossfield passes with another person. It was under no pressure whatsoever, but the way you receive the ball – right foot, sprayed the ball, clipped it, drove a pass [with his] right foot; left foot clipped the ball, received it so comfortably. Neymar was the in-vogue player at the time. And Fabio sort of looks like Neymar in appearance. So he just had that feel about him before he started playing. I turned to my friend and said, ‘This kid’s unreal.’

“You could just see it, and then we started playing actually. And you could see his sense of timing on the ball was brilliant. The way he received the ball was so fluid. His decisions were very consistent, very mature at that age. Right foot left foot, no pressure, very comfortable both. At the time, I was actually in the period of transitioning over from Brentford to Fulham. I said, ‘Look, whatever club I’m working at, I want to try to bring this boy into that club.”

How Humphrey feels about Carvalho’s ascent

Humphrey counts himself ‘privileged and blessed’ to have been tipped off about Fabio Carvalho, whose career has gone from strength to strength. “When you put a boy in a team, you always want them to do well.” But he admits that it’s ‘surreal’ to see Carvalho on the cusp of a move to Liverpool.

He’s tried to watch Carvalho ‘once every season’ since then. “One time, not long after he’d signed for Fulham, he recognised me in the crowd. He must have thought, ‘Oh yeah, that’s Carlos’s friend,’ and he did a rainbow flick! I don’t think that’s in his game at the moment. The showboating isn’t there to that extent.”

We wrap up with Humphrey saying: “Good on Fabio. All the best to him and his family.” Fulham fans will be thankful to him and his helpful friend, and the 19-year-old Carvalho may inspire the next generation of wonderkid-obsessed scouts.