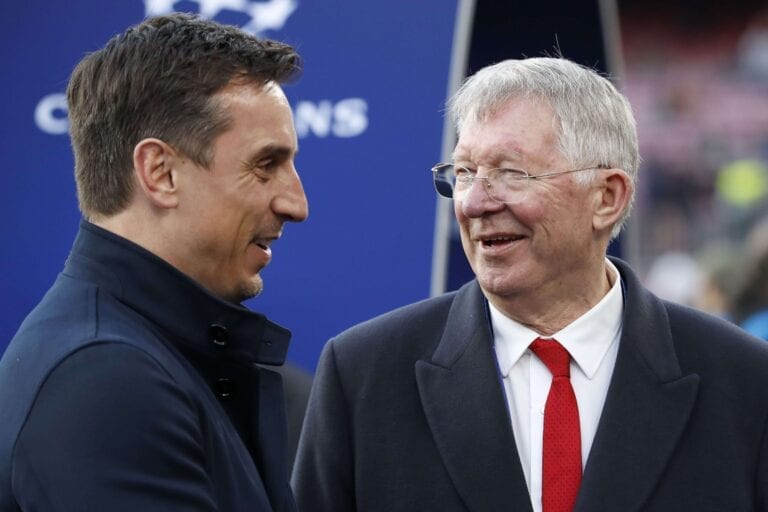 Gary Neville has revealed the best piece of advice that his former Manchester United boss Sir Alex Ferguson offered to him during his time at Old Trafford.

Neville spent his whole playing career at United whilst Ferguson was manager at the club.

During a recent Twitter Q&A season, the Sky Sports pundit was asked for the greatest piece of advice he had ever been given by the Scot.

He replied: “You have a choice every day. Work hard and never give in. Or don’t.

The user who asked the question pointed towards an interview Neville recently completed with Ferguson, prior to the release of a film profiling his former manager’s life.

Directed by Ferguson’s son, Jason, Sir Alex Ferguson: Never Give In looks in-depth at his time growing up in Glasgow, his playing career and his 26-year spell as United manager.

It was filmed whilst the legendary manager was recovering from a brain haemorrhage. The official website for the film calls it “a moving story about the extraordinary power of memory”.

The documentary also features the likes of Eric Cantona and Gordon Strachan, and is due to be released in UK cinemas on May 27.

Neville was also asked about the best central midfielders he played alongside, to which he replied with former United team-mates Paul Scholes and Roy Keane.

He also named Keane as the one player from his playing days that United could do with right now.

And in another answer, Neville named Mason Greenwood as the one wildcard he would take to the European Championships this summer. The following day, Greenwood was named in Gareth Southgate‘s provisional 33-man squad for Euro 2020.