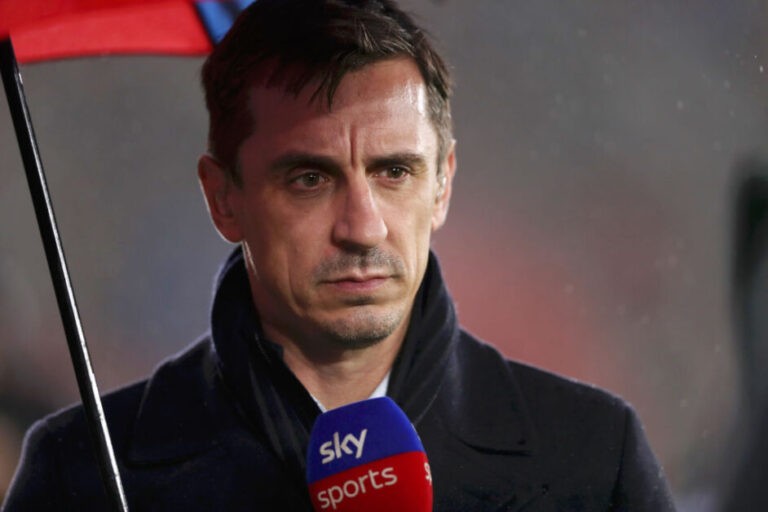 Gary Neville has stirred up controversy with his latest rant about what he labelled as the ‘Man United whingebags’ holding the team back.

The former Red Devil went after two of the team’s stars following Manchester United’s draw against Newcastle on Monday night.

It was a poor performance from United, undoubtedly the worst since Ralf Rangnick’s appointment as interim manager.

It’s not only the result that was disappointing. United were particularly lethargic in midfield despite dominating possession throughout the game. With no depth whatsoever coming from the wings, United’s attempts at goal were predictable and easy to defend.

Man United fans have a right to be fuming. And that includes Gary Neville.

The Sky Sports pundit went on a five-minute rant last night, questioning the leadership of the team’s stars. He singled out Cristiano Ronaldo and Bruno Fernandes as players whose body language belies their status.

Neville was particularly upset about the effect that the so-called Man United whingebags would have on younger players.

“They’re the two senior players. It’s devastating for younger players when the two best players are looking at every other player like they’re not good enough.”

Ronaldo’s and Fernandes’s negative body language stands in stark opposition to Edinson Cavani’s. Last night, Neville reiterated his plea for the Uruguayan to get the starting job in United’s attack.

“Cavani takes that [negativity] away. I don’t think Cavani wilts in the presence of Ronaldo or Fernandes, I think he stands up to them and helps other young players on the pitch. He needs to be on the pitch.”

It’s easy to see where Neville is coming from. Cavani’s season has been a frustrating one, with only six Premier League games played so far.

Nevertheless, Cavani has made the most out of his limited chances. When he’s on the pitch, he gives United an aggressiveness they have sorely missed this season.

Last night, he saved United from losing against Newcastle with a lucky finish in the second half.

Neville’s Man United whingebags rant: Is it a leadership problem?

With his Man United whingebags rant, Neville is suggesting that there’s a lot of finger-pointing happening behind the scenes.

Neville might be on to something. It was only a few months ago that he advised Ole Gunnar Solskjaer to call out Ronaldo on his body language.

The Sky pundit also had a few words for Harry Maguire. Much has been talked about Maguire’s struggles on the pitch this season; however, Neville made a point about his off-the-pitch role.

“There’s a leadership struggle going on. Harry Maguire is the captain but he doesn’t feel like the captain.”

Maguire, who is having his worst season since joining United, blamed Covid protocols for his team’s poor performance.

Manchester United will have a chance to bounce back on Thursday against Burnley. After Neville’s rant, all eyes will be on the players’ body language.