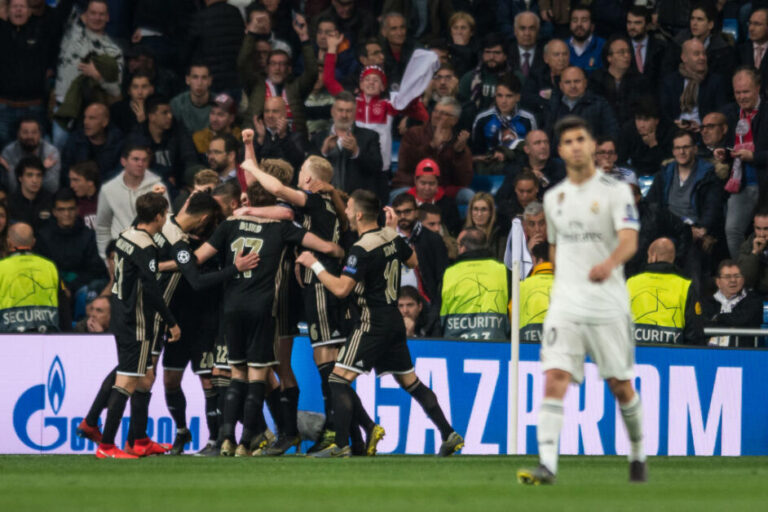 The Ajax class of 2019 is one of the most impressive golden generations in recent years.

With a squad mostly held together by youngsters, Ajax had one of the best seasons in their illustrious history.

They won the Eredivisie with an outstanding 86-point record in 34 games. PSV trailed closely behind with 83 points, but Ajax proved to be simply unbeatable. They only dropped points in six games and had an insane +87 goal difference.

And that’s not even close to being their most significant achievement that season.

Ajax were only seconds away from the 2019 Champions League final when a last-minute goal from Lucas Moura shattered their dreams. All in all, it remains a stellar Champions League run that saw them knock out Real Madrid and Juventus.

In particular, the Ajax class of 2019 will never forget their 1-4 win against Madrid at the Bernabeu. It was a one-sided performance, with Ajax’s midfield schooling Casemiro, Kroos, and Modric.

Ajax would go on to the Champions League quarter-finals, where they knocked out Cristiano Ronaldo’s Juventus 3-2 on aggregate.

It will soon be three years since one of the most surprising Champions League runs in recent years. To commemorate the anniversary, we have tracked down the careers of every player in Ajax’s starting XI against Madrid.

Where are the protagonists of the Ajax class of 2019 now?

A product from the Barcelona academy, Onana had been Ajax’s starting goalkeeper since the 2016-17 season. The 2018-19 campaign cemented his status as one of the most promising goalies in the world.

Unfortunately, Onana received a ban from playing for 12 months after testing positive for Furosemide in February 2021. He only re-joined first-team training sessions this September. With his contract ending at the end of this season, Onana has been linked to a Premier League move.

The Moroccan right-back climbed to the starting line-up during the 2018-2019 season. Since then, only injuries have limited his playing time.

He is one of the few members of the Ajax class of 2019 to remain with the team. He’s had a stellar season so far, scoring four goals and assisting twice in 14 Eredivisie games.

The 2018-19 season was only De Ligt’s second as a fully-fledged first team member. With his height and authoritative style of defending, he was regarded as the world’s best centre-back prospect.

De Ligt moved to Juventus that summer for a £76.95m fee. He has started chiefly for the Italian giants in his first three seasons with them, but he hasn’t been consistent enough to truly fulfil his potential.

Still only 22, De Ligt has plenty of time to transform into the legendary defender he was expected to become.

After a decent four-year spell at Manchester United, Daley Blind returned to Ajax in the 2018-19 season. A one-size-fits-all defender, Blind proved a perfect match with Erik ten Hag’s flexible formations.

He has been unlucky with injuries over the past couple of years, but Blind is back in top form for Ajax. The 31-year-old veteran has played in 24 games so far this season.

The Argentinian international joined Ajax in January 2018 after the Dutch giants agreed to pay Independiente a £4m fee. After immediately becoming Ajax’s first choice as left-back, Tagliafico was called up for the 2018 World Cup.

A solid defender with outstanding stamina, Tagliafico has lost his starting place this season. He won the Copa America with Argentina last summer.

A box-to-box midfielder with excellent scoring ability, Van de Beek stayed for one more year at Ajax. After a strong 2019-20 season, he moved to Manchester United in August 2020 for a £35m fee.

So far, his United spell has proved unsuccessful. The 24-year-old had a nightmare debut season, playing under 600 minutes in the Premier League. The story remains the same this year, with Van de Beek accumulating less than 400 minutes across all competitions.

The Danish veteran had been Ajax’s midfield boss since the 2012-13 season. A key player in their Champions League run, Ajax let him go at the end of the season. After two unsuccessful spells in Genoa and Heerenveen, Schöne returned to NEC Nijmegen last summer.

Arguably the most talented player of the Ajax class of 2019, de Jong was one of the most sought-after players in the world even before the club’s UCL run. He signed for Barcelona in the 2019 January transfer market for a reported fee of €75m.

However, the Azulgranas would have to wait until the summer to complete the move.

De Jong soon proved his worth with stellar performances against Real Madrid and Juventus. He has been a key starter for Barcelona in his first three seasons. But just like with De Ligt, you get the sense that there’s more to come.

Hakim Ziyech was Ajax’s star signing in the summer of 2016. The winger had just scored 17 goals for Twente and desperately wanted a move to a bigger club.

His breakthrough came in the 2018-19 season when he scored 21 goals. Since then, the Moroccan has only scored 18 in the last three seasons. Far from reigniting his career, his 2020 move to Chelsea has made his market value plummet. At age 28, he might leave the Blues on loan in January.

Neres joined Ajax at age 19 in January 2017. A promising and electric winger, Neres got starting duties during the 2017-18 season and answered by scoring 14 goals.

His 2018-19 season was also formidable, with 12 goals and key performances in the Champions League. Unfortunately, a serious knee injury in late 2019 cut his progression short. Still an intriguing prospect, Neres has mostly come off the bench for Ajax this season.

One of the few veterans in the Ajax class of 2019, Tadic is your classic football underdog. He joined the Dutch in June 2018 for an €11.4m fee after an impressive four-year spell at Southampton.

Throughout his Premier League years, the Serbian forward only scored 23 goals – way below his 2018-19 tally of 38. At age 33, he continues to register great goal contribution numbers, providing 35 assists throughout 2021.

Dolberg was a key off-the-bench man for the Ajax class of 2019. A Danish product who came through the Silkeborg academy, he joined Ajax at age 17 and would stay at the Dutch club for three more years.

The forward moved to OGC Nice late in the 2019 summer transfer window for a €20m fee. His spell in the Ligue 1 has proved to be one of diminishing returns. After scoring 11 goals in his first season and six in the second one, he is down to just three in the current one.